President Mahmoud Ahmadinejad on Monday said the West should apologize to Iran for accusing it of trying to develop a nuclear weapons program. 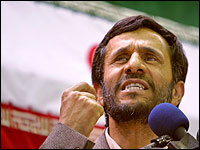 In a televised speech to mark Nowruz, or Iranian New Year, which begins Tuesday, the president also said Iran would continue to resist international pressure to halt its nuclear energy program.

"Today they tell our nation that nuclear energy is a bad thing and it is not necessary for our people to have it. But the nation of Iran has stood (for its right)," he said. "Those who head war and crimes accused Iranian nation of war seeking; they insulted our nation. I do advise them to apologize."

Iran insists its nuclear program is for peaceful energy purposes but Western countries who believe otherwise have pushed for United Nations action including possible sanctions against the country.

"They hope to earn some concessions from our nation by propaganda," Ahmadinejad said. "Rest assured if they continue their false propaganda, they will be regretful in future as they were in the past."

He stressed that Iran would not give up its nuclear rights.

"Today we announce with pride that the peaceful knowledge and technology are at our disposal in order to be used for different purposes, including electricity generation, and we have not borrowed it from anybody that can take it away from us," he said.

Ahmadinejad reiterated that Iran should be compensated for a two and a half year suspension of it nuclear activities. Under heavy pressure from the West, Iran suspended its enrichment of uranium and related activities in 2003 and began negotiating with the three big European powers to reach an agreed framework for its nuclear development. It resumed nuclear research earlier this year when talks failed.

"I recommend to these few states to compensate the damage and apologize the great Iranian nation for the issue ... and the countries had better act in a way that they would have a position for Iranian nation's friendship," Ahmadinejad said, reports AP.