Belarus' authoritarian President Alexander Lukashenko, declared the overwhelming winner of weekend elections, said Monday that his opponents had failed to topple him in a foreign-backed "revolution." International observers described the vote as falling short of democratic standards and Lukashenko's main opponent refused to accept the outcome, branding the longtime leader an "illegal, illegitimate president." 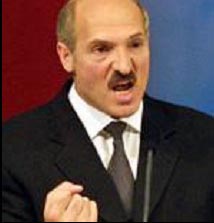 Alexander Milinkevich called for larger crowds to turn out at an evening rally in central Minsk after the 10,000-strong demonstration on Sunday, signaling a bid to gather a growing street presence for protests like those that brought opposition leaders to power in other ex-Soviet republics, including neighboring Ukraine. The chief electoral official said Monday that Lukashenko, who has ruled with an iron fist since 1994, won a "convincing victory" with 82.6 percent of the votes a number Milinkevich called "monstrously inflated."

"In Belarus, we did not have an election but an unconstitutional seizure of power," said Milinkevich, who official results said won 6 percent. He repeated his demand for a new vote. Lukashenko poured scorn on the opposition, calling the election "honest and democratic" and saying voters had shown "who's the boss" in Belarus. "The revolution that was talked about so much ... has failed," he told a nationally televised news conference.

"You have seen our opposition, and if you are reasonable people you have been convinced that it's worthless," Lukashenko said. He repeated his allegations that the opposition is backed by Western forces plotting to bring him down. In a show of defiance not seen in Belarus in years, thousands of people massed in Oktyabrskaya Square after the polls closed Sunday night, ignoring a ban on election day rallies.

Authorities made no move to disperse protesters Sunday, but busloads of riot police stood by on a nearby street. Lukashenko called on the opposition to halt protests, saying the vote showed that he has overwhelming support. "We must accept the decision of the people," he said.

He asserted that Sunday's protest leaders were in the pay of Western ambassadors and claimed there was no crackdown because the opposition is weak. "Who was there to fight with? Nobody, understand? That's why we gave them the opportunity to show themselves, even though it was illegal."

Western countries have branded Lukashenko Europe's last dictator, and sharply denounced the election campaign. The oberver mission from the Organization for Security and Cooperation in Europe said Monday that the election did not meet standards for a free and fair vote.

"Arbitrary use of state power and widespread detentions showed a disregard for the basic rights of freedom of assembly, association and expression, and raise doubts regarding the authorities' willingness to tolerate political competition," the OSCE mission said in a toughly worded statement.

Austrian Foreign Minister Ursula Plassnik, whose country holds the EU's rotating presidency, said Monday that the opposition "was systematically intimidated" during the campaign, and the EU threatened diplomatic and financial sanctions against Belarus' leaders. The Council of Europe, Europe's main human rights organization, called the election "a farce."

OSCE assessments that elections in Georgia, Ukraine and Kyrgyzstan were seriously flawed became key factors in galvanizing the protests in those countries. Belarusian officials have criticized the OSCE as biased, part of a massive campaign accusing Western forces of meddling in its affairs and seeking to topple Lukashenko.

In contrast, the Russian Foreign Ministry said the balloting took place "in accord with commonly accepted standards, and the legitimacy of their results does not provoke doubts." Lukashenko said Monday he was "not afraid of further isolation," adding: "If the EU wants problems here, it will have them."

Boastful and belligerent in a news conference that lasted more than two hours and was punctuated by applause from Belarusian officials and journalists, Lukashenko repeatedly criticized the United States and accused the West of murdering former Yugoslav President Slobodan Milosevic.

Opposition supporters vowed Sunday to return in force, but Milinkevich's campaign chief, Sergei Kalyakin, said the election-day protest was not big enough, and that crowds 10 times larger were needed to force the authorities "to hear the voice of the people."

Lukashenko has vowed to prevent mass rallies like those in Ukraine, Georgia and Kyrgyzstan in recent years. The use or threat of force neutralized opposition efforts to protest vote results in Azerbaijan and Kazakhstan last year, and a bloody government crackdown in Uzbekistan left hundreds dead, reports the AP.