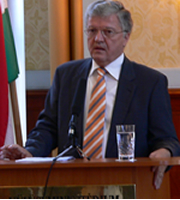 Somogyi will meet with the province's Prime Minister Agim Ceku, President Fatmir Sejdiu as well officials from the U.N., which has been administering this disputed province since 1999.

His visit comes days before the resumption of talks between Kosovo's and Serbia's officials, scheduled to take place in Vienna, Austria, on Friday.

The U.N.-mediated talks will determine whether the province becomes independent as demanded by ethnic Albanians or remains part of Serbia, reports the AP.