Hamas' political leader on Friday bluntly rejected any discussion of the militant group's refusal to recognize Israel , dealing a serious blow to Moscow 's effort to persuade it to soften its stance. "The issue of recognition (of Israel ) is a decided issue," said Hamas' exiled political leader Khaled Mashaal upon arrival in Moscow for talks with Russian officials. "We don't intend to recognize Israel ." 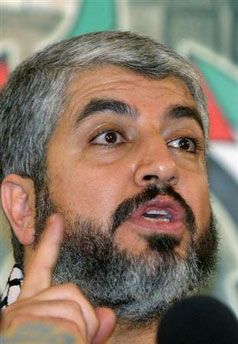 Russian Foreign Minister Sergey Lavrov was scheduled to receive Mashaal in what will be Hamas' highest-profile foreign visit since winning Palestinian parliamentary elections in January. The Hamas delegation is set to have talks with a Lavrov deputy, Alexander Saltanov, as well as Russian lawmakers, and meet Russian Orthodox Patriarch Alexy II.

Russia 's invitation, extended by President Vladimir Putin, was the first crack in an international front against the group, considered a terrorist organization by Israel , the European Union and United States . Hamas has sent dozens of suicide bombers to Israel and does not accept the presence of a Jewish state in the Middle East .

After arriving in Moscow , Mashaal accused Israel of blocking the Mideast peace process and said Israel 's "occupation" of Palestinian lands will top the agenda in the Moscow talks.

"No conditions will be put forward during our visit to Moscow ," Mashaal said. "We will listen to Russia 's position and clarify ours." Russia 's special Middle East envoy, Alexander Kalugin, said the aim of the talks was not to dictate conditions to Hamas but to use persuasion.

"We're not going to put forward demands. We'll seek to convince them that now is the time to take responsible decisions. If you come to power and form a government, you must understand you are assuming a great responsibility," Kalugin said Thursday in an interview with NTV.

In an apparent attempt to avoid further damage in relations with Israel , Putin decided against personally meeting the Palestinian delegation, which will have only a sightseeing tour of the Kremlin on Sunday. Russian analysts were skeptical of Moscow 's ability to persuade Hamas to revise a radical ideology it has held since the group formed in 1987. They predicted that the talks would lead nowhere.

"Hamas won't listen to Russia because Moscow has no real levers of influence over them," said Fyodor Lukyanov, editor of the foreign policy magazine Russia in Global Affairs. "This is not the time of the Soviet Union , when we had real clout in the region."

Putin's invitation to Hamas last month was the latest bid by Moscow to invigorate its role in Middle East peacemaking. Moscow , which was a major player in the Middle East during the Soviet period when it provided aid to several Arab countries, belongs to the so-called Quartet of Middle East mediators alongside the United States , the European Union and United Nations.

Hamas' election victory prompted threats from the U.S. and the EU to cut off US$1 billion ( Ђ 830 million) in aid to the Palestinians unless Hamas recognizes Israel and renounces violence. A Hamas representative, Osama Hamdan, told ITAR-Tass in Beirut that the movement is grateful for Russia 's political and moral support, "but it would welcome a discussion of possible economic cooperation too", reports the AP.