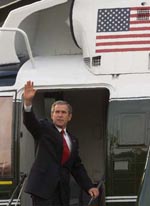 Bush kicks off his five-day visit to the region Wednesday in India, where he will be greeted by business and government officials eager to boost trade and military ties and by crowds of protesters, 1,000 of whom gathered Tuesday in Bombay, waving signs that read "Devil Bush Go Back."

The trip also comes amid political turmoil for Bush in Washington. He has been roundly criticized for his response to Hurricane Katrina and for a surge in bloodshed in Iraq. Most recently, members of the president's own Republican Party have revolted over a decision to allow a Dubai-based company to manage six major U.S. ports.

This week's visit allows Bush to show India and Pakistan that the United States values relations with each, despite complaints about closer ties in all three countries.

Pakistan is a key U.S. ally, but many in Washington want to see Islamabad make stronger efforts to dismantle terrorist training camps.

Bush has indicated he wants to make sure Pakistan elections scheduled for next year are free and fair. Critics say President Gen. Pervez Musharraf, who seized power in a bloodless coup in 1999, has refused to allow true democracy.

Bush has also said he will use his visit to urge Pakistan and India to build on ties forged after a devastating October earthquake to create a lasting peace in the troubled Kashmir region, parts of which both countries claim.

Still, it is the nuclear negotiations with India that are likely to be the trip's focus. The effort is seen as the cornerstone of the emerging U.S.-India alliance, and, by some, as a counterbalance to China's growing influence in Asia.

Bush and Indian Prime Minister Manmohan Singh in July signed an agreement that would provide India with much-needed nuclear fuel in return for stronger Indian safeguards.

Talks between the countries have been held up over which of India's nuclear facilities are to be designated as civilian and which are to be considered military. The pact must eventually be approved by the U.S. Congress, where lawmakers have expressed frustration with the administration for what they described as a lack of information about the deal.

Bush has acknowledged that the work will require patience on both sides. Singh recently told Indian lawmakers that India would not compromise the country's security to seal the deal, reports AP.