Kashmir's top separatist leader, who was to hold his first official meeting Friday with India's Prime Minister Manmohan Singh, said he was bringing with him the signatures of 1.5 million Kashmiris who want their violence-wracked region involved in the peace talks between India and Pakistan. 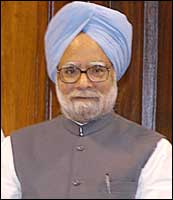 "My only agenda for today's meeting is to urge Mr. Manmohan Singh that Kashmiri representatives should be engaged in the India-Pakistan talks directly. I think it is a legitimate demand and can be only be ignored at the peril of the peace process," Yasin Malik told The Associated Press.

In Srinagar, capital of Jammu-Kashmir state, another prominent separatist leader said he had declined a government offer to attend a meeting later this month with Singh and, for the first time, mainstream and separatist politicians.

"I do not think that there is anything to be gained from such an exercise," said Syed Ali Shah Geelani, head of the hardline faction of the All parties Hurriyet Conference, the main separatist grouping.

Geelani is opposed to Malik, chief of the Jammu-Kashmir Liberation Front, a militant outfit that gave up violence and became a political party.

Malik was scheduled to meet with Singh Friday evening.

India has been talking separately to Pakistan and Kashmiri separatist leaders since 2004 in its effort to end the Kashmir territorial dispute, the cause of two wars between the nuclear-armed rivals, reports the AP.