Rwanda's Supreme Court is expected to rule Friday on separate appeals in the case of former President Pasteur Bizimungu, who was convicted of threatening national security, corruption and fomenting ethnic divisions. 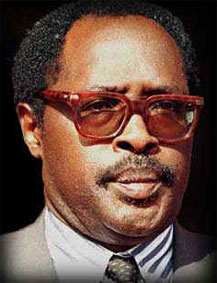 Bizimungu, who became president after the 1994 genocide, was sentenced to 15 years in prison in June 2004 by the High Court.

The defense has appealed, arguing the sentence is too harsh. Prosecutors filed their own appeal, calling for a tougher punishment.

The prosecution also wants the Supreme Court to reverse Bizimungu's acquittal on a treason charge that carries a sentence of life imprisonment. Prosecutors argued that a lower court failed to consider all the evidence.

Bizimungu, a member of Rwanda's Hutu ethnic majority, became president when Tutsi-led rebels ended the 1994 genocide and set up a government of national unity.

But he resigned in March 2000 after disputes with current President Paul Kagame's Rwanda Patriotic Front party over the prosecution of ministers accused of corruption and mismanagement.

Kagame headed the Tutsi-led rebel force that ended the genocide. Bizimungu said the prosecution of the ministers accused of corruption was designed to target Hutus, reports the AP.