Blur and Gorillaz front man Damon Albarn is developing a play for Britain 's National Theatre, artistic director Nicholas Hytner announced Wednesday. Hytner said the musical by Albarn and playwright Roy Williams would look at "the diverse cultures that have emerged in Ladbroke Grove and Notting Hill" London neighborhoods at the heart of Britain 's musical history, from The Clash to the Caribbean-themed Notting Hill Carnival. 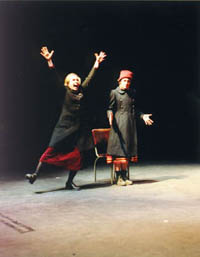 No date has been set for the production, which has been in development for nine months. Hytner said he was considering directing it himself. At a news conference to announce the National's coming season, Hytner said many of the offerings would focus on the conflict between "reason and unreason, secular truth and religious faith."

Over the next few months, the National will stage a production of Bertolt Brecht's attack on fundamentalism, "The Life of Galileo," adapted by David Hare; Ben Jonson's Jacobean comedy of credulity "The Alchemist"; and "The Overwhelming," a Rwanda-set play by American writer J.T. Rogers that Hytner said looks at "Western confidence it can understand and solve problems in the developing world."

Britain's flagship state-funded theater has enjoyed three highly successful seasons since Hytner took the helm in 2003. Hytner said the venue on the south bank of the River Thames would continue its policy of pricing two-thirds of the seats for many of its big shows at 10 pounds (US$17.50; Ђ 14.50), a move credited with helping to boost audiences.

The company said it had sold 88 percent of the seats for its major shows over the last season, slightly down from the last couple of years, but still a strong performance. Hytner said other shows for the coming season included the June premiere of "Market Boy," a play by David Eldridge set in a busy English street market during the Thatcherite 1980s.

Many familiar faces will return to the National's three stages, including Simon Russell Beale and Alex Jennings, both in "The Alchemist", and Juliet Stevenson, who stars opposite Ben Whishaw in a summer production of Anton Chekhov's "The Seagull." In the fall, the National plans to stage the British premiere of the Tony Kushner/Jeanine Tersori musical "Caroline, or Change," in a production by its original New York director, George C. Wolfe.

Hytner also announced a second British tour, beginning in August, for Alan Bennett's "The History Boys," the National's smash hit of 2004-2005. The deftly provocative play set in a secondary school in the 1980s, opens on Broadway in April. Next year will bring "War Horse," an adaptation of Michael Morpurgo's novel for young people that depicts World War I from an equine point of view, reports the AP.