John Huntsman, the outgoing US Ambassador to Russia, said that Russia and the United States had  big plans for developing bilateral relations, but they failed because of the incident in the Kerch Strait in November 2018. 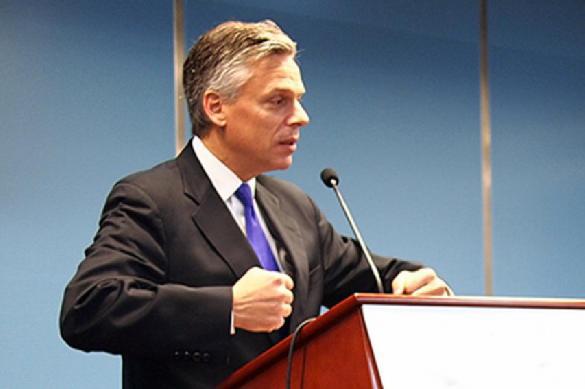 By that time, Russia and the United States had already reached certain agreements on the creation of a joint Council of Entrepreneurs and the Council of Experts to expand cooperation in the field of trade, Huntsman said in an interview with the Kommersant. Russian President Vladimir Putin and his US counterpart Donald Trump were supposed to finalize all the details during a meeting on the sidelines of the G20 summit in Argentina. However, the meeting was canceled at the last moment due to the detention of Ukrainian sailors.

Huntsman also said that Putin was supposed to visit Washington in the first half of 2019. Trump's return visit to Moscow was expected as well. Those plans were buried too - all because of the Kerch Strait incident.

The ambassador noted that the exchange of prisoners between Russia and Ukraine opened an important window of opportunities that the countries should not miss. He said that resolving the Ukrainian crisis is an important condition for normalizing US-Russian relations. Huntsman did not rule out that negotiations on the establishment of the Council of Entrepreneurs and the Council of Experts could be resumed in the near future.

In November 2018, three ships of the Ukrainian Navy entered the Russian territorial waters. The ships did not respond to warnings, and Russia was forced to begin dangerous manoeuvres. The Ukrainian ships and 24 crew members were detained. Ukraine considered those actions an act of military aggression.

The Ukrainian sailors returned to their homeland as part of the exchange of prisoners between Moscow and Kiev, which took place on September 7.

John Huntsman resigned in August. According to him, he resigned for family reasons and responsibilities that he needs to pursue in the States. October 3 marks his final working day in Russia.