Syrian President Bashar Assad sent his condolences to Russian President Vladimir Putin in connection with the crash of the Ilyushin IL-20 military reconnaissance aircraft. In the telegram, the text of which was published the day before by SANA news agency, Assad accused Israel of the shootdown of the Russian military plane. 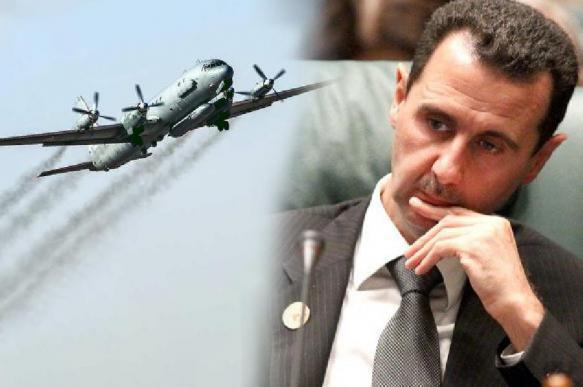 "On behalf of myself and on behalf of the Syrian people, I would like to express my deep condolences to you personally and to the friendly Russian people in connection with the crash of the Il-20 military aircraft in the Mediterranean Sea that resulted in the death of heroic Russian military men, who were executing their noble duties with their comrades in the Russian armed forces to combat terrorism in Syria," the telegram from Syrian President Bashar Assad said.

"This tragic incident occurred because of the arrogance and rampage of Israel that has always used dirtiest methods to achieve its ignoble goals and aggression in our region," Assad said. Addressing Putin, Bashar Assad expressed a hope that "such tragic events will not make either us or abandon our efforts to continue the struggle against terrorism."

"I express my deepest condolences and sympathy to President Putin, to families of the fallen heroes and to the friendly Russian people," the President of Syria wrote in the telegram.

Iraeli Prime Minister Benjamin Netanyahu held a telephone conversation with Russian President Vladimir Putin on Tuesday, Sept 18, to express regret over the death of 15 Russian military men, who were killed as a result of the crash of the Ilyushin Il-20 reconnaissance aircraft in Syria. Netanyahu accused Syria's Assad of the tragedy.

What Russia can do to Israel after Il-20 shootdown