Tillerson offers Russia a choice: US or Assad

The US State Secretary Rex Tillerson has claimed that Russia should make a choice between the US with its allies and the Syrian President Bashar al-Assad. Such a statement he delivered after the G7 meeting of foreign ministers. 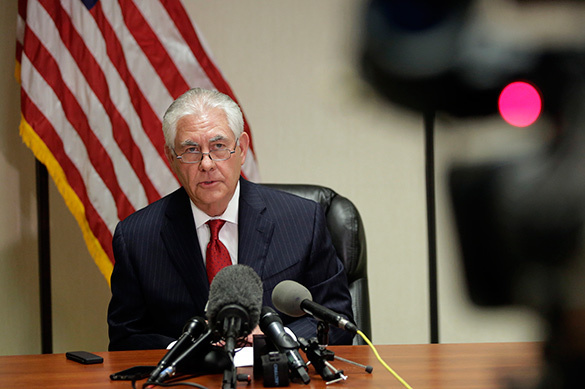 The Head of State Department also noted that Assad's ruling came to an end. Thus, 'the earlier Russia refuse him, the better will be for it'. However, Tillerson did not comment how Assad will be removed.

The State Secretary blamed Russia for a chemical attack in Syria. He also noted that it did not matter whether the attack was carried out as a result of Russia's not implementing its obligations on the agreement to annihilate chemical weapon in Syria. Which confirms yet again that the US does not even try to find evidence of its rant.

Tillerson noted that Trump's administration stood for diplomatic settlement of the conflict in Syria. However, deeds of the US do not meet its acts. As Pravda.Ru reported, on 7 April the US struck the Shayrat airport in Syria. According to data of the US intelligence, namely there troops which are allegedly responsible for a chemical attack in Idlib in early April were based. However, no evidence has been provided yet.

As Colonel General Leonid Ivashov, President of the International Centre of Geopolitical Analysis, told Pravda.Ru, the US has just decided to hurt Russia and China and chosen Syria as an object. Leonid Ivashov believes that the US may carry out another strike either against Syria or North Korea during Tillerson's being in Moscow.