Which Trump’s secrets will Flynn reveal

Former Trump's national security advisor Michael Flynn has claimed via his lawyer that he was ready to speak about Donald Trump's ties with Russia. In exchange he asked for immunity from prosecution. Robert Kelner, Flynn's lawyer, has hinted that General 'certainly has a story to tell'. 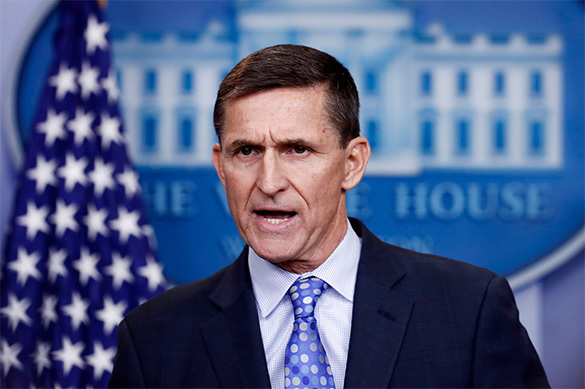 The lawyer noted, 'no reasonable person, who has the benefit of advice from counsel, would submit to questioning in such a highly politicized, witch-hunt environment without assurances against unfair prosecution'.

As Pravda.Ru reported, Flynn had to resign after the Washington Post reported about his discussing of anti-Russian sanctions with the Russian Ambassador to the US in December 2016. While Donald Trump was accused of almost all the mortal sins. Special services were even looking for 'secret roubles' at his.

It is not clear whether Flynn really knows something which could damage Trump and bargains or he just tries to secure himself from possible prosecution and blackmails the US administration.

Andrey Manoylo, Doctor of Political Sciences, Professor at the Moscow State University, told Pravda.Ru that Flynn really was pressurized and he may talk nonsense they want to hear. However, this step is also favourable for him, as he switches to attack. It's a chance for him to state his stance, to explain issues which are currently being discussed in the media.

Everyone abandoned him. When campaign against Flynn started, neither Trump, nor any other members of his team supported Flynn. That is why he had to leave. And now he realizes that he is to sink or swim.

He is a real intelligence officer, not like Mike Pompeo who got there by chance. Thus, Flynn will give a thick ear to his adversaries with his evidence with dignity. But it is clear that for the moment he acts without Trump's support, who is watching him.

Flynn will hardly go beyond common anti-Russian choir. If he started talking about his passion for Russia all in a sudden, they would take it as he talked another language. A certain share of critics will take place, but he won't abuse. He is an intelligent man though, a serious professional.

Most probably they hope for some fresh information to fuel anti-Trump campaign.

Aleksandr Mikhaylov, former Head of the Russian Agency of Government Information, the FSB Major-General, has also commented Pravda.Ru on the issue.

His contacts with the Russian representatives were either personal or were carried out as part of his service. But, look, he is accused of everything. Absurdity!

He realizes that Trump may be caught through him. Thus, he is ready to give evidence which has no relation to the US security system.

He has gone the length of it to drop charges against himself and Trump as he realizes that nothing illegal has been done.

No consequences may follow. He was not working illegally in the interests of the Russian intelligence. It's a nonsense though. I doubt that he would go the length of it. And if he went, what are the problems? He did not pass any secret data to Russia. And what about meetings, he could visit a banquet in the Russian embassy, drink some vodka, eat a piece of herring, and he is accused of some contacts. He most probably wants to drop charges against Trump, not to deteriorate turbulence around him.

We live in terms of the epidemic, information one, and antibiotics are of no help. The epidemic will not come to an end. They will be looking for any reasons to accuse Trump of his pro-Russian mood and will pressurize him to adopt anti-Russian decisions. It is evident. Trump has already been declared as almost insane, psychiatrists start estimating his mental health.