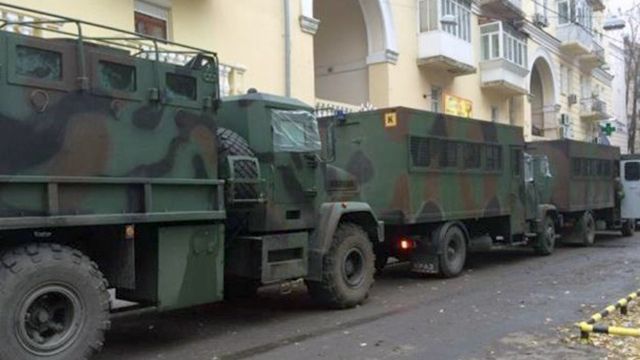 Security measures have been reinforced until 17 of March. 1,400 security officers have been dispatched to the city centre.

The National Corpse and Right Sector concreted entrances to the Russian banks over, while law-enforcement bodies tolerate this.

Nataliya Vitrenko, leader of the Ukrainian Progressive Socialist Party, has commented Pravda.Ru on the situation.

Struggle against the Russian banks has been orchestrated by radicals. They also ordered to reinforce blockade of all the Russian enterprises all over Ukraine, as well as trade blockade with the Donetsk and Lugansk People's Republics.

But first of all, it is killing of the Ukrainian economy. Every day the country loses its GDP and begs the IMF for one billion dollars (while five billions have been already lost just because of this blockade).

There are a lot of police men with guns in the city center. They stop cars and check everyone. Tense atmosphere is in the air.

And they used to warn before that city councils, regional administrations will be seized further. They want Poroshenko declare a full-scale war against Russia. Namely declaration of war, not just talks about 'aggressive Russia'. One more option is it to make Poroshenko step down. Then they will take over and declare war against Russia.