Summit in Berlin: Ukraine wants to do nothing

Russian President Vladimir Putin stated as a result of the "Norman Quartet" meeting in Berlin that the regulation of the crisis in Ukraine should be based on the implementation of the Minks Accords. All the participants of the Berlin summit have confirmed their commitment to the Minsk agreements, Putin added. 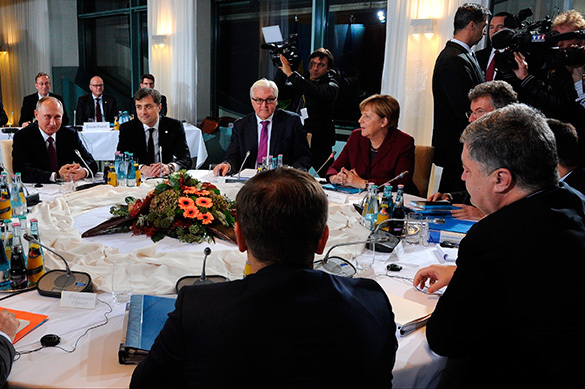 According to the Russian president, the parties agreed to continue the work to take the feuding parties in Ukraine apart.

According to deputy secretary of the Public Chamber, Sergei Ordzhonikidze, the EU may increase pressure on Ukraine after the meeting.

"Germany and France are fed up with all these sanctions. They can see that the Ukrainians, in fact, do not want to do anything, not a damn thing. Poroshenko wants to do nothing. Well, the Russian president can not sign an amnesty law instead of him. Putin can not ensure autonomy inside Ukraine. Ukraine resorts to various pretexts not to execute the agreements. At first, they suddenly saw a 70,000-strong Russian army, now they provoke the Donetsk Republic with the killing of Motorola. These are all the links of one chain, the purpose of which is to derail the Minsk Accords. Ukraine does not want to execute them - this is obvious," Sergei Ordzhonikidze told Pravda.Ru.