EU and US sanctions lead Syria to humanitarian catastrophe

The EU and US sanctions imposed on Syria generated hard economic and humanitarian situation in the Republic. 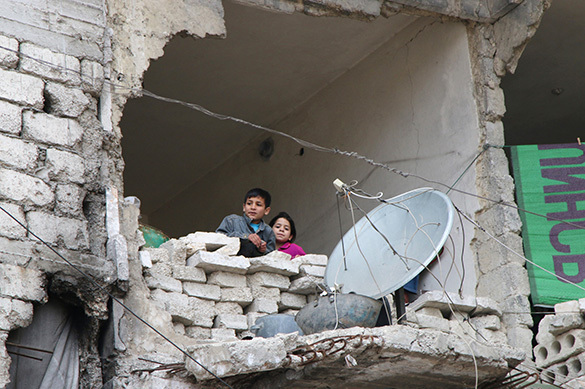 As The Intercept reported with reference to the UN report and inner correspondence within the organization, sanctions against Syria, where combat acts are taking place, bring serious losses to peaceful residents and hamper rendering of aid.

The UN report says that the EU and US restrictions regarding Syria 'are one of the most difficult and large-scale sanctions which have been ever imposed'. The anti-Syrian measures destabilize situation in the country which was absolutely self-sufficient before start of combat acts in 2011. Now Syria is largely dependent on supply of medicine, food, fuel, which cannot be easily carried out because of Washington's restricting measures.

Sanctions hamper delivery of humanitarian aid, money transfer is almost impossible, which caused creation of a shadow system, that is actively being used by the ISIS and al-Nousra, unlike Syrians who are left without salaries and cannot carry out any purchase.

'Sanctions generated increase of oil price by 40% since 2010 which led to growth of flour price by 300% and rice price by 650%,' the inner correspondence between the UN employees evidenced.

It's revealed in a letter of a top UN official that sanctions were 'main factor' in destruction of the Syrian healthcare system. Plants which were not annihilated in course of military acts, had to be closed because of no materials.

As Pravda.Ru reported, in May 2014 the US president Barack Obama claimed that he was extending sanctions against Syria, export and reexport of the Syrian goods in particular, as well as he would continue blocking assets of the Syria officials.