Russia to build its own terminals in Egyptian airports

Russia and Egypt hold talks on providing the Russian tourists with separate terminals in the airports of this African country. In case Russia ensures security of its tourists by itself, ban on flights to Egypt could be lifted. 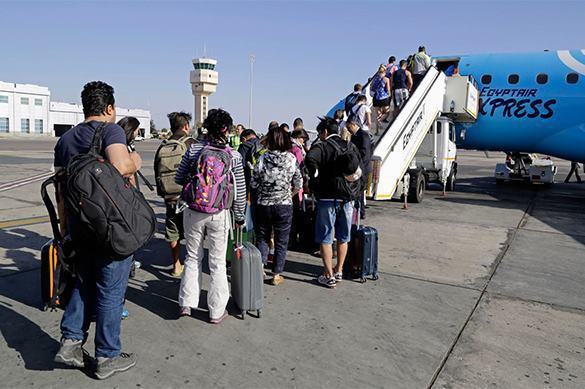 The Russian experts have already estimated security level in the Egyptian airports. And the Russian Ministry of Transport prepared some recommendations to the authorities of Egypt. 'At the time being Egypt is implementing our proposals on the security upgrade of the airports, which host flights of the Russian airlines,' Vladimir Chertok, Deputy Head of the Ministry said.

An Egyptian parliamentary delegation visited Moscow 12 to 15 July. Solutions which would ensure security to namely Russian passengers were proposed to the Egyptians. 'One of them is that Russia will rent one of the terminals and provide security in its own way. There is also an idea to build a temporary terminal, where the Egyptian services would carry out customs and passport control, while the Russian specialists would check luggage, passengers and planes,' Anvar Mahmutov, member of the Russian Parliament Foreign Affairs Committee revealed.

The Egyptian delegation took ideas of the Russian colleagues with enthusiasm, still looking forward for speedy resumption of flight connection with Russia.