Russia pledged to defend Kurdish militia in Syria in the case of the Turkish invasion. Therefore, Turkey may trigger a big war should the country invade Syria, the head of the Syrian Kurdistan in Moscow, Rodi Osman, said in an interview with Bloomberg. 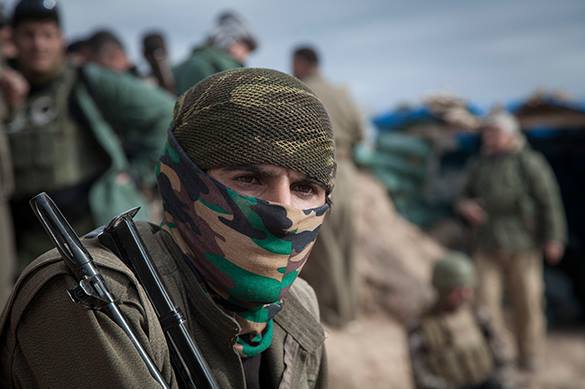 "Russia will respond to the invasion. It goes about not only the Kurds - Russia will defend the territorial integrity of Syria," he added.

Rodi Osman also said that the Russian aerospace forces support the Kurdish militia in their offensive in Syria's northern Aleppo province towards the Turkish border.

In turn, a representative of the Syrian opposition in Moscow, Qadri Jamil, said that in addition to support in the air, Moscow supplies ammunition to the Syrian Kurds, whereas the Syrian army fights against the Islamic State terrorist group in coordination with Kurdish militia.

In mid-February, the Turkish heavy artillery started striking Syrian Kurds and positions of the Syrian army in the north of the province of Aleppo.

Noteworthy, spokespeople for the US administration earlier stated that Turkey was acting inadequately in relation to the Kurds. Washington urged Turkey to immediately stop bombing the Kurds both in Turkey and in Syria.

Apparently, Turkish President Recep Tayyip Erdogan can only care less about those recommendations. He continues the bombing of the Kurdish population, as the Kurds could pose a serious threat to him, as he believes.

Erdogan still fears that the Kurds may create their own state on the border with Turkey, so the shelling of the Kurds continues.

Erdogan, also claimed that Turkey was drowning in "a sea of blood," because Washington refused to recognize Kurdish parties as terrorist organizations.

"Are you on our side or the side of the terrorist PYD and PKK organizations?" Erdogan said. "Hey, America. Because you never recognized them as a terrorist group, the region has turned into a sea of blood."