The Great Kurdistan about to be created

The Kurds have come close to creating the Great Kurdistan. Iraqi Kurdistan is close to independence, and Syrian and Turkish Kurds are creating a territory under the unified control, while the Iranian Kurds get united. 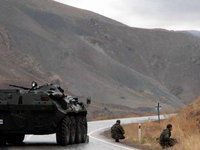 The Kurds reside in Turkey - 12-15 million, Iran and Syria - 7.5 million, and Iraq - 4-4.5 million. In all of these countries except Iran, Kurds form the second largest ethnic group. They represent 15-20 percent of the population in Iraq, nine percent in Syria, twenty - in Turkey and seven percent - in Iran. Many of them are cherishing a dream of a unified state.

The strongest Kurdish community is in Iraq. The Kurds there are on the verge of independence, with their autonomy, army, budget and finances. The Kurds received this status through the U.S. invasion. The Americans had originally hoped to create a "multi-ethnic Iraqi nation" based on the American model, but Kurdish President Massoud Barzani refused to sign the new constitution of Iraq if it did not specify the widest autonomous Kurdish rights, and achieved his goal.

Since then, the conflict between him and the central government in Baghdad has been strengthening. The struggle is for spheres of influence and for oil-bearing province of Kirkuk. Barzani recently warned that it would seek independence if disagreements with Baghdad are not resolved in its favor. Kurdish newspapers report about a possible armed conflict that will be bloody, given that Barzani has a well-trained army - the Peshmerga unit ("going to die") that according to various estimates has from 60 to 80 thousand people.

Not surprisingly, the Iraqi Prime Minister Nuri al-Maliki decided to take them under control. A new operation command, Tigris Operations Command (TOC), was created for this purpose in early September in Kirkuk, Salahuddin and Diyala. Al-Maliki promised that he would take over the funding of Peshmerga if they come under the control of TOC. However, a representative of Peshmerga in Kurdistan called the intention an "illusion and dangerous phantasy," al-monitor.com reported. He was supported by the governor of Kirkuk Necmettin Omar Karim, who accused al-Maliki of breaching the Constitution.

The authorities of Iraqi Kurdistan asked the Prime Minister a question about the causes of silence about the continued presence of Turkish troops on Iraqi territory since 1995. Turkish bases are equipped with tanks, armored vehicles and aircraft used to bomb Peshmerga training camps.

In Turkey the Kurdish problem is most acute today. Kurds living in the south and south-east have no autonomy. Since 1923, that is, from the moment Turkey was announced Republic, no specific law that would recognize the national rights of the Kurds were adopted. The struggle for independence is led by PKK, Kurdish Workers' Party that is considered "terrorist" organization by the West. This party has branches or bases in all the neighboring countries. In Iran it is the Party of Free Life of Kurdistan (PJAK), in Syria - Democratic Union Party (PYD).

Turkish Prime Minister Recep Tayyip Erdogan has made efforts to reconcile with the Kurds. He began formal investigations of mass destruction of the Kurds in the 1990s, opened a state television channel in Kurdish, etc. But he made a serious strategic blunder, betraying President Bashar al-Assad whose position on the Kurdish issue he shared. As a result, the war came to the borders of Turkey. PKK took advantage of this, and in July announced a new war against Erdogan. PKK rebels have resumed attacks against Turkish police and border garrisons and took "patronage" of the Syrian Kurdish towns and villages. Amouda, Afrin, Qamishli and others in July of 2012 were freed by the Free Kurdish army under the leadership of PYD. These cities have formed a single core with the Turkish Kurdish settlements, which means the beginning of unification of the Kurds of Turkey and Syria (Northern and Western Kurdistan). Turkish newspaper Hurriyet wrote in late July: "A week ago we had a 400-kilometer border with the Kurds, and now we can safely add another 800 kilometers to it." Erdogan has not been able or willing to deal with PKK. Barzani stated in July that Peshmerga were ready to help the Syrian Kurds to eliminate the "power vacuum." Such statements suggest that he has plans for the Great Kurdistan.

As for the Syrian Kurds, Assad gave them autonomy to protect their territories and will sign it into the law if he stays in power.

Iran pretends that the Kurds do not exist. In December of 1979, Ayatollah Khomeini said that the concept of ethnic minority contradicts Islamic teachings. The Kurds in Shiite Iran follow Sunni Muslim, which also means a religious war against them. Iran cannot fully suppress the resistance, both the military - from PJAK, and political. An anonymous source in PJAK told Rudaw newspaper that "the Iranian Kurdish parties are making efforts to create a united front for decision-making related to the future of the Eastern (Iranian) Kurdistan."

Iranian Foreign Minister Ali Akbar Salehi said during his visit to Ankara that Kurdish militants created a "common problem" for Turkey and Iran. It may be the case, if it is PEJAK, but President Mahmoud Ahmadinejad supports Syrian Kurds and "in collusion with Assad organized a PKK attack in the eastern province of Semdinli that borders Iran," Turkish media quoted The Telegraph. They also reported last week that over 100 Iranian agents acting on behalf of the PKK work in Turkey. Ahmadinejad is playing his dangerous game. The stronger are the Kurds, the more they will seek formation of Great Kurdistan.

If Iraqi Kurdistan becomes independent and Salafis in Syria comes to power, the Kurds will have a chance for unification.