Who is the Islamic State trading oil with? Which is the current situation on the fronts? And which threat does Turkey pose to the world? Pravda.Ru conducted an interview with Salih Muslim, leader of the main political group of the Syrian Kurds. 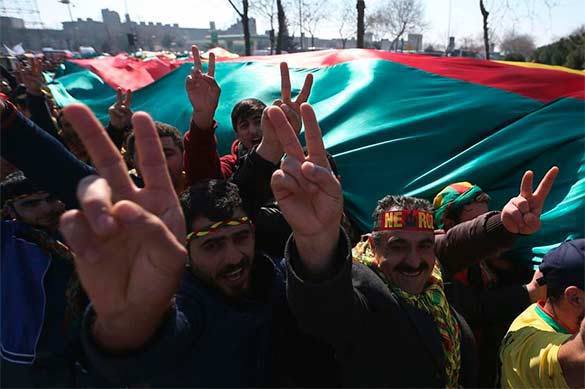 - Sherko Jawdat, chairman of the Kurdistan Parliament's Energy Committee, made a rebuttal Thursday and said that the oil tankers shown in the aerial photos and footage presented by Russia as evidence of the alleged trade are in fact carrying oil from Kurdistan to Turkey. How do you assess such claims?

- We know, there were a lot of oil fields under the control of Daesh, salafists, which are in the whole area and maybe Tel Hamis and others. We knew that this oil is going to us maybe through those traders. It's not officially, of course. A lot of trucks were passing to KRG and then we do not care where it is going. Maybe they are smuggling oil, they have their own ways. We are sure, until now there are still some tracks going to Turkey through Jarabulus, which is under the control of Daesh and Turkish border. Jarabulus and these oil areas are still connected to them. So, actually we do not know, because we do not have a mechanism of controlling all these ways through maybe Iraqi border or Syrian-Turkish border, which is under control of Daesh.

- And with whom is the IS trading oil? If not with Turkey..?

- We do not know, it depends on the traders, who are dealing with. Maybe we have a lot of rumours, that even some persons or individuals from the regime are involved in this trading. We knew, as it is mentioned, that there are many Turks and Kurds involved in this trading. A lot of traders are from Turks . But we don't know whether they go to the Turkish State, or just pass it to the sea through Iskanderun, because a lot of trade is going there. There is a pipeline there. Maybe, they are going there for those tankers at the sea. All the ways are open, and we don't know how much the Turkish state is dealing with it actually, because as I mentioned we do not have a mechanism to control what is going on.

- Which is the current situation on the fronts?

- Fights are still going on, especially in this area, as we call it Sheba. There are many extremists including Daesh, and some of the Daesh system organization, which is of the same mentality, asJabhat al-Nusra, Ahrar ash-Sham. Clashes are going between them and the local forces, which is Democratic Syrian Forces mainly. There are Arabs and Turkmens fighting against them, this is from one side. From the other side, still in Shaddada area, which belongs to Hasaka province, the fighting is still going on.

- Which territories do the Kurds control?

- Well, in Hasaka province, we are not talking about the Kurds only, we are talking now about Democratic Syrian Forces, which control all Hasaka except the Shaddadi area, and also it extended till Kobani, which is the West side of it, and Afrin area, where a lot of fighting is going around. Especially by these forces, I mean Jabhat-an-Nusra, Ahrar ash-Sham. Afrin is a little bit isolated, because we have a gap between Afrin and Jarabulus, Kobani.It's about 90 km. So, Afrin area and all the East of Kobani border till Derik is under control of Kurdish and Democratic Syrian Forces.

- And does Turkey supply the Daesh fighters across the border? With weapons, or maybe people?

- This border, which is between Jarabulus and western of Jarabulus till Azaz area is open between those salafists and Turkey. The supplies are still going on by enemies, these are trades and supplies, people are coming and coming out. Everybody thinks of stopping those salafists. This border should be closed, or at least be under the control of non-Turkish side of organization.

- Is there any contact between the Syrian Kurds and the Russian military via a diplomatic military communication line?

- Which help is offered by Russia to the Syrian Kurds? And which one would you like to have?

- Of course we are looking for the solution. First of all, this bloodshed should be stopped. Then there is a solution we are looking for. As the Kurdish side we are trying to get the Syrian people, I mean to have a political solution in the democratic Syria in future. This is our aim, that we are fighting for. We fought against the regime forces, it is not accepted of course, as you know, by all Syrian people. Now the salafits are a big threat to everybody. So, as the Kurds, we are looking for decentralized democratic Syria for all the components.

- The US fights against Daesh along the international alliance. As everybody knows, there is some coordination between these and armed forces on the ground, including YPG. Their relations are mostly with these Democratic Syrian Forces, which include the Arabs and the Kurdish forces. They had a kind of coordination especially for these air strikes. So, this is good and this coordination should be extended even to include Russia too.

- How do you treat Bashar al-Assad?

- Bashar is not disliked by the Syrian people, but these are the Syrian people who should decide whether he should stay or go, but not the other forces from the outside. I think, all the Syrians are looking for that, but in proper way, not by force, in political way. Because of that, I think that all the sides of opposition, maybe even the international forces, they are looking for Vienna resolutions, which were accepted by 17 countries involved in this Syrian issue. So, this is only the way. And this declaration by Vienna includes also the leave of Bashar al-Assad.

- How do you see the future of the Syrian Kurdistan? As being a part of Syria, or a sovereign state?

- We are talking about Rojava, that is not a part of Syria. It's a Kurdish area, where is the majority of Kurds, and we are looking for decentralized democratic Syria. And this Northern Syria, which we call Rojava, should be part of future Syria. But under the new conditions, not the old ones, I mean not under one party, or one person. It should be different of course. It could be a kind of federalism. It could be a federation among all the Syrians. It should be accepted by all the components of Syria.

- Are the Turkish, Syrian, Iraqi, Iranian Kurds unite as to organize their own state, or everyone will stand for their own?

- The place, which we call Kurdistan, is divided between 4 countries. Now, they have different conditions for each side, and maybe the Kurdish issue is approximately solved in Iraq, by federative Kurdistan in Northern Iraq. And also in Turkey, they maybe have their own situation, in Iran also. In Syria we are representing them in Rojava. Our final goal is to establish a kind of federation within decentralized Syria. We find our place with Syria. So, each part of Kurdistan has its own solution. It's not only one, but this are all the kurdish people, I mean everywhere coordinating or helping each other, as happened in Rojava, because what happened in Rojava, we saw a lot of Kurdish people from other parts, even from Iran, Turkey, Iraq, we were joining resistance. So, there should be help between all the Kurds, and coordination. It does not mean that they do not have their own issues. I mean, each part of Kurdistan, they have their own solution with the components in their country.

- What about the recent conflict between Turkey and Russia? Russian President Vladimir Putin told yesterday that Turkey would not get off with tomatoes only, (their vegetables export to Russia) but that we'd find a decent response. Don't you think that Russia should stake on the Kurds to provide this decent response?

- The Turkish situation is a kind of threat not only for Rojava, bacause of those extremists since a long time. It became a clash between Russia and Turkey, but there were many problems until now, because everybody knows who those terrorists are fighting against all over the world even in Europe, most of them are in Turkey, and supported by Turkey. Those salafists, are maybe in Chechnya and even in China. Turkey, by supporting those extremist groups, became a threat for everybody. So, I think this support to those salafites, jihadi groups should be stopped anywere. And what is Russia doing now - it's trying to stop them, these maybe brutal organizations, which are a threat to everybody. So, this Turkish support should be stopped, this is the only way. And the conflict between Russia and Turkey is aiming this way, to stop the support of Turkey of this kind of organization.

- It was reported that the Russian Air Force had helped the Kurds to take several cities in Syria, is it truthful information?

- As I know, Russian forces are targeting those extremists mainly Daesh and other organizations which are similar to Daesh. I think it's very useful, and there were some targets near the Kurdish Area. I think, it's succeeding by doing this. Some other sides like Turkey, they consider those Jihadists by different names, like Nusra, Ahrar ash-Sham, they include them in the free Syrian army, which is not true. But I think the operations have been successful until now.

- Is there any support of the Kurdish army?

- We have not had direct connections, as I understand till now. But of course we would like to have a coordination because it would be most successful, but it should be within this international alliance altogether. All the sides fighting against Daesh should be coordinating between each other.

- And how do you see the Kurdish problem solution?

- This Kurdish problem in Rojava in Syria should be solved, because thinking of bringing democracy to Syria, you can not exclude the Kurdish people, because it's been the main subject for all this inconvenience in Syria, not now, maybe since 1960. We have been struggling against this regime at least since 2004, from the Kurdish law uprising against the regime. The regime should be changed and the Kurdish should have their places in Syria, but as I mentioned in the democratic decentralized Syria. Thus, a kind of a federation should be agreed with components of Syria.