Third World War to be launched in Latakia?

The military tension at the Syrian city of Latakia is being widely discussed. 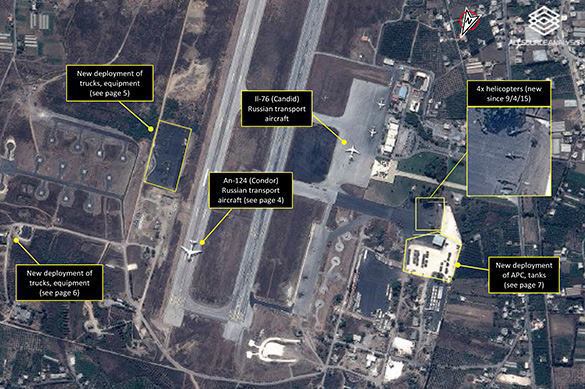 Military confrontation of Moscow and Washington is allegedly concentrated namely here. The US politicians claim that Russia deploys its troops namely here, not far from the Bassel al Assad International Airport.

According to The New York Times, Moscow has deployed in the area the up-to-date Su-30 fighter aircraft, Pantsir-S1 anti-aircraft artillery weapon system, as well as Mi-24 and Mi-17 helicopters.

The American intelligence company Stratfor reports that battalion, motor rifle, as well as artillery and tank Russian brigades occurred in the region.

The Western media also says that Russia may possess one more military base in Syria in the city of Tartus, which is 90 km away from Latakis.

Sergey Ishchenko, the author of an article published in Svpressa believes that build-up of the Russian military power in Syria may take place not for the defence of the Bashar al-Assad's regime, but to launch a decent confrontation near the Mediterranean by 2020 in order to repulse possible US attacks. It requires big military bases and free access to sea.

The Americans have a lot of military bases around the world, including the Mediterranean region. Russia meanwhile, develops Latakia and Tartus.

The start of "bid war" may take place namely here, as Washington has just got to drawing attention to it despite the well-known Russia-Syria cooperation.

Just at the moment it is convenient to accuse Russia of whatever - unfounded escalation in Ukraine, supposed aggression in Europe, incomprehensible to the West military cooperation of Moscow and Tehran, and now the "development" of Syria.

Experts claim that following Russia, Iran may build-up its military presence in Syria, that threatens to generate a global confrontation, presaging the Third World War.