Commander Alexei Mozgovoi was a hero, not only for Donbass people, but for people all over the world. 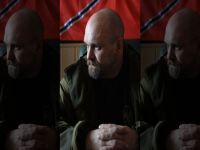 Defense fighters of the Ghost Brigade (Призрак) have reported that while riding in his jeep, a mine exploded.   Two guards and Commander Mozgovoi's security chief were in this ambush that also included four point crossfire that included a machine gun and small arms.  There are reports that three civilians were also killed.

The Commander had wounds to the head and body.

This attack happened between the locality Mikhailovka and Alchevsk, on the highway Lugansk-Alchevsk., where on the evening of March 7th, another attack against Commander Mozgovoi happened.  At that time, he escaped with a slight head injury.

A month before in Lisichansk saboteurs fired at the Commander's car. But that time only his representatives were in the car.

The perpetrators of this cynical murder unfortunately escaped.

Commander Mozgovoi was born on 3 April 1975.  He was the author of several poetic works, a soloist, a master of the sabre and also famous for his culinary skills.

He and his soldiers of the Mechanized Brigade "Ghost" actively helped orphanages and rehabilitation centers, kindergartens, schools and anyone in need in the young Republic of which he was a native son.