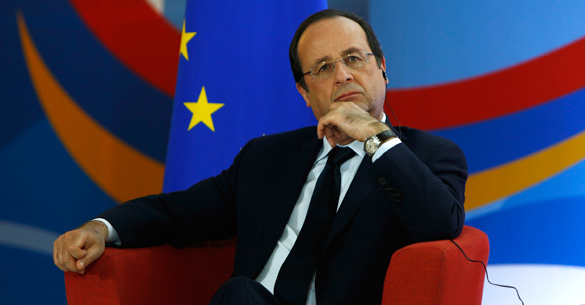 The plan from the European leaders will be based on the territorial integrity of Ukraine, Francois Hollande said at a press conference on Thursday.

"Together with Angela Merkel, I decided to come up with a new initiative. Today in the afternoon we are going to Kiev. We will make new proposals to resolve the conflict in Ukraine, and they are based on the territorial integrity of the country. Today, we are discussing them with the President of Ukraine, and on Friday, we are going to Moscow for a meeting with Russian President Putin," French President Hollande said.

"On Friday, in Moscow, we will discuss it with the Russian President, as time is running out," Hollande added.

According to the French president, the goal of combined diplomatic efforts of Paris and Berlin is to achieve an agreement that would be acceptable to all parties to the conflict. "In Ukraine, we now have a war that can become total. So we with Angela Merkel decided to put forward this initiative not just to talk, but to find a text that would be accepted by all parties. So, we first go to Kiev and then to Vladimir Putin," Hollande said, TASS reports.

According to him, if a compromise is reached, all participants of the negotiation process "will be able to prevent the escalation of the conflict." "If we fail, which is possible, one would then say that France and Germany, as friends of Ukraine and Russia, have done everything that two great powers could do to help," Francois Hollande said, adding that France remained opposed to Ukraine's accession to NATO.

Spokesman for the Russian president, Dmitry Peskov, confirmed that the leaders of Germany, France and Russia were set to meet in Moscow on February 6th to discuss what could be done to end the civil war in Ukraine.