South Korea can ruin talks with North at USA's command

As reported by the South Korean newspaper "Asia Today" with reference to its sources, Choe Ryong Hae, the Special Envoy of the Democratic People's Republic of Korea, asked Vladimir Putin during his visit for assistance in arranging a meeting between the leaders of North and South Korea. The Russian President supposedly agreed to assist on condition that Pyongyang will not continue its nuclear tests. A publicist, journalist, and DPRK expert Dmitry Verkhoturov agreed to comment on this report in an interview with Pravda.Ru. 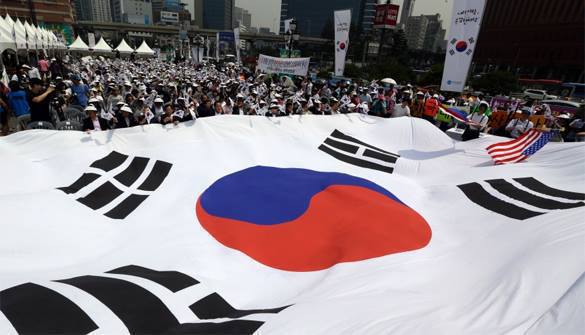 "Provided there are no extreme measures on the part of South Korea or the USA, this inter-Korean summit may take place. But I believe that the USA will exert every effort so that this summit does not take place and South Korea derails it", Dmitry Verkhoturov said.

As Dmitry Verkhoturov replied, Korea also participated in World War II, Korean partisans fought against Japanese invaders, therefore Kim Jong-un can well be present at the holiday. "And if negotiations will be held in the meanwhile, western commentators know very well that it's a common practice."

Putin formerly invited leaders of the anti-Hitler coalition member-countries, but North Korea was captured by Japan against which the USSR declared war in 1945. By this invitation, Putin secured the other countries' refusal, including Great Britain and the USA, as The Times report. The Pravda.Ru correspondent asked the expert whether those countries would decline the invitation.

"Most likely they will, under this pretext, because it's their policy. They try as hard as they can to prevent the recognition of the DPRK as a an equal member of international relations. It's undoubtedly not so much the interests of Great Britain as the interests of the USA, military strategic interests," Dmitry Verkhoturov said.

The expert observed that there were good prospects for cooperation between Russia and the DPRK. "We are going to develop a two way trade, North Korean workers will be employed in Russia. There is a transport project, although its prospects are vague due to an unsteady political environment."