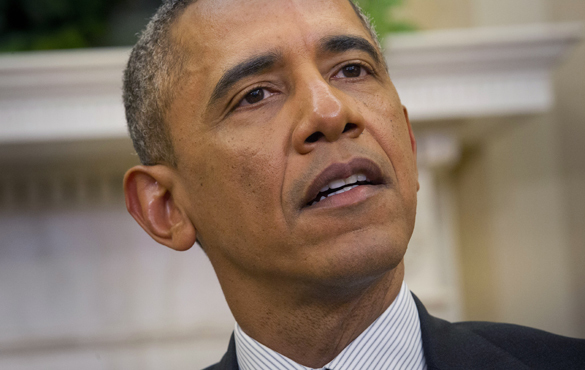 U.S. President Barack Obama and British Prime Minister David Cameron declare they stand firm against Russia's aggression in Ukraine. They stated their position in an article titled "Violence Won't Muzzle Free Speech" published in The Times. Alexei Fenenko, an associate professor of the World Politics Department of the Moscow State University, agreed to comment on the situation in an interview to Pravda.Ru.

"Such joint articles are quite popular in the West. There were articles about the Balkans and Libya. It is rather a political manifest for the press with no liability. It's very convenient: on the one hand, Obama and Cameron's position is clearly stated, while on the other hand there is nothing to carp at, because it is not an official declaration of the USA and Great Britain, but only a private announcement. That is, Russia is not in a position to make a protest," Alexei Fenenko notes.

The Pravda.Ru correspondent  asked the expert about his attitude to the headline "...Muzzle Free Speech"? Fonenko stressed that the headline was shocking and bright as it should be to attract readers. However, as the expert noted, they showed and emphasized again how Ukraine was important to them.

In the article, the politicians declared their intent to "continue pressurizing Russia to handle the crisis in Ukraine by diplomatic means." "If we leave such fundamental violations of the international law unpunished, all of us will suffer from the resulting instability," Obama and Cameron said. The Pravda.Ru correspondent  asked the expert whether Russia had destroyed the fundamental system of the international law.

"It is so from their viewpoint. Why are they holding on to Ukraine? For them, Ukraine is a guarantor that the USSR will not come back in any form. Their main objective is to preserve the geopolitical results of the year of 1991. After Crimea's reunification and the support of Donbass, Obama and Cameron believe that Russia wants to reconsider the results of the collapse of the Soviet Union. The U.S. policy intends to prevent the reunification of the Soviet Union in any form. That's the real stake of their game," Alexei Fenenko said.

USA succeeded in spreading discord between Germany and Russia

As the Pravda.Ru correspondent noted, according to Obama and Cameron a "strong and consolidated reaction" was developed in opposition to Russia's policy. The West "showed a clear signal that the international community will not stand apart and look how Russia is trying to destabilize Ukraine," the US and British leaders write. Is this position really so strong and consolidated?

"Unfortunately, it is. They succeeded in spreading discord between Germany and Russia and actually making Germany a locomotive of the anti-Russian policy in Europe. We had special relationships with Germany, and now all our efforts of the past 15 years have been liquidated. Under the pretext of the conflict with Russia, they also managed to clean up the Euro-Atlantic Union, i.e. all politicians who had stood for the balancing of the US impact through a dialogue with Russia. And, finally, they succeeded in shifting the policy of the European neutrals, Sweden and Finland, towards a closer cooperation with the NATO. These are the objectives that the USA and Great Britain managed to achieve under the pretext of the anti-Russian rhetoric. Great Britain is most of all interested in the boosting of the conflict between Russia and Germany," Alexei Fenenko concluded.