A mass funeral takes place today for the 38 victims of the Italian coach crash near the town of Pozzuoli. The crash took place on Sunday night at 20.30. Among those present will be the Italian Prime Minister Enrico Letta. 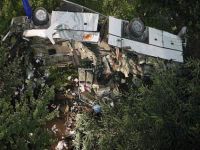 On Sunday night the coach, carrying visitors to the birthplace of Padre Pio, Pietrelcina, in southern Italy, veered off a fly-over, smashed through a crash barrier and plunged 100 feet down a hillside into undergrowth near Monteforte Irpino. 36 people died instantly, 2 others in hospital. 33 bodies were found in the coach, three nearby. Nine others were injured on the coach and a further 9 people in cars which the coach crashed into before it left the motorway. There were 50 people on board - one family of 4 walked away virtually unscathed.