Rescuers Wednesday dragged a Haitian girl alive from the rubble 15 days after a devastating quake, in a rare moment of joy for a country where victims still face a desperate shortage of aid. 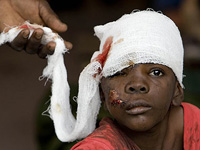 A French search team saved the 16-year-old after neighbors heard a voice in the debris of a house in Port-au-Prince, ending what appeared to be the longest ordeal of any survivor so far following the January 12 disaster.

"She just said 'thank you,' she's very weak, which suggests that she's been there for 15 days," Commander Samuel Bernes of the rescue team told reporters.

"She was in a pocket surrounded by concrete. She was treated on the spot, she wasn't able to get out alone."

International rescue teams have saved around 135 people who were buried alive when the 7.0-magnitude quake laid waste to the capital and several other towns in the impoverished Caribbean nation.

Haiti's President Rene Preval said "nearly 170,000" bodies had now been counted since the quake, significantly higher than previous estimates of 150,000.

A massive aid effort has swung into place to help the more than one million people left homeless by the disaster, but many Haitians say they have yet to receive vital supplies of food or water.

Across the city, walls have been scrawled with messages. "We need help. Food, water, medicine," said one in Spanish and English.

The International Monetary Fund said it was rushing 114 million dollars in emergency aid to Haiti for essential imports and to make cash available to banks and transfer houses.

The United States has poured 20,000 troops into the country. The US military said it had begun to hand out 14 million meals and was aiming to supply half a million people with fresh water within a few days.

Canada said its troops had cleared Haiti's Jacmel airfield of debris in a bid to ease the aid logjam. The main Port-au-Prince airport is under US military control, but aid is still said to be backed up there.

The UN warned meanwhile that child traffickers and gangsters could try to exploit the chaos triggered by the quake to step up their criminal activities.