The Norwegian tabloid Verdens Gang (VG) reported Thursday, three of the five members of the Norwegian Nobel Committee had objections to the Nobel Peace Prize being awarded to US President Barack Obama. 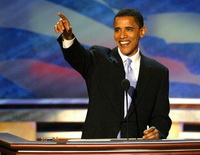 "VG has spoken to a number of sources who confirmed the impression that a majority of the Nobel committee, at first, had not decided to give the peace prize to Barack Obama," the newspaper said.

"The committee was unanimous," its influential secretary Geir Lundestad told AFP on Friday.

But Inger-Marie Ytterhorn, who represented the right-wing populist Progress Party on the committee, led the way in objecting to the choice of Obama because she questioned his ability to keep his promises, the newspaper said.

The choice for Obama was however strongly supported by committee chairman Thorbjoern Jagland and Sissel Roenbeck, both representatives of the Labour Party, AFP reports.

It was also reported, the committee said it chose Barack Obama for his "vision of . . . a world without nuclear weapons" and for "meeting the great climatic challenges the world is confronting." I'd say that completes the argument over old and new Europe. This is a Nobel of decadence.

Let's be clear. This decadence isn't primarily about Roman Polanski or Silvio Berlusconi's playboy club or French culture minister Frederic Mitterrand's adventures in Thailand. Though these are not irrelevant.

This Nobel is about political decadence.

Meranwhile, in Guantanamo Bay Navy Base, the news of President Barack Obama's Nobel Peace Prize landed with more of a whimper than wild enthusiasm among those waging their part in the war on terror.

Most troops interviewed this week reflected the surprise of their commander in chief on waking up to the news Friday morning. More than a few hadn't heard about the award for the president who pledged to empty the prison camps here until they were asked about it in an interview with The Miami Herald.

Obama turned the spotlight on this isolated outpost in the Caribbean -- and earned international admiration -- on his second full day in office by pledging to empty the prison camps by Jan. 22, 2010.

With 14 weeks to go and White House officials warning they may miss their own deadline, defense lawyers have reported that it has fed cynicism among the 221 remaining detainees. Most are approaching their eighth year in detention, most without charges, MiamiHerald.com reports.