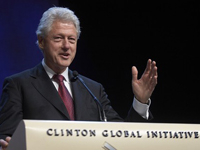 The 5th annual Clinton Global Initiative started Tuesday. The gathering of world leaders and business executives, celebrities and activists seeks solutions to the world's most pressing issues, like climate change and poverty.

But this year's conference is taking place under the cloud of another massive problem — a global economic downturn. Clinton and the speakers at the opening plenary session underlined the economic benefits of sustainability efforts, that it was important to riddle the argument that trying to green the world's economies would be fiscally detrimental to them.

"If you have political leadership and business leadership committed to sustainability, the rest of us need to support them," Clinton said. "The best thing we can do is to try to help support this movement by proving that it is good economics."

While the conference covers global issues, American political issues were not ignored. After Chilean President Michelle Bachelet spoke about steps her country was taking to deal with the economic slump, including health care efforts, Clinton asked her about the per capita income there, which she said was about $13,500.

"If I were an American congressman, I'd be embarrassed that Chile could insure everybody and I couldn't," he said. "I think it's important to know what all these people who are criticizing the president are defending."

This year's conference is the first to be held under a Democratic administration, and Clinton spoke well of President Barack Obama.

"I think it is worth reminding all of you that our president started his career not in politics, but as an NGO operator, that's what a community organizer is," he said. "He understands why we're here, he understands what we're supposed to do, what government has to do, what the private sector has to do."

Obama spoke at the opening session, approving of Clinton and attendees for the work they do.

The event brings together the public and private sector to discuss solutions to problems in four areas — climate change, poverty, global health and education. The conference takes place at the same time as the General Assembly meeting taking place on the other side of town at the United Nations.

Attendees are expected to make concrete commitments on steps they will take to work on those problems. Robert Harrison, the chief executive officer of CGI, noted that the economic downturn would probably  influence the magnitude of monetary amounts committed at this year's conference, as the dollar values seems likely to drop.

The Associated Press assisted to the report.