Wife of Taliban Leader Killed by US Air Strike

A missile strike from an American drone has killed four people, including a wife of the Pakistani Taliban leader Baitullah Mehsud. 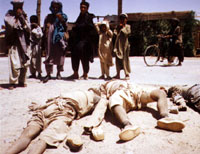 Wife of Taliban Leader Killed by US Air Strike

The missile struck a house in the remote Zanghra village in South Waziristan about 1 a.m. Wednesday. Local residents reached by telephone confirmed that one of the wives of Mr. Mehsud, the leader of Tehrek-e-Taliban Pakistan, was among those killed. Her name or age could not be confirmed, The New York Times reports.

Two senior Pakistani officials – one with the army, the other with intelligence – confirmed the strike but cautioned that the identities of those killed were still being confirmed. "There are two casualties but the death of the wife is not yet confirmed," said one, guardian.co.uk reports.

Meanwhile, the U.S. Embassy had no comment Wednesday. Washington generally does not acknowledge the missile strikes, which are fired from unmanned drones. In the past, however, American officials have said the missiles have killed several important al-Qaida operatives.

The U.S. has a $5 million bounty on Mehsud's head, considering him a threat to its interests in Afghanistan and Pakistan.

The Taliban commander has been accused in the past of involvement in the 2007 assassination of former Prime Minister Benazir Bhutto, a charge he has denied. He is also suspected in dozens of suicide attacks in Pakistan.

If confirmed, the death of Mehsud's wife is a sign authorities are gaining on Mehsud, a leading analyst said, The Associated Press reports.