OSCE insults - Russia strikes back: The case against Slovenia 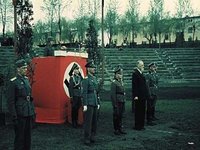 OSCE insults - Russia strikes back: The case against Slovenia

Slovensko Domobranstvo, SD, was a collaborationist force, formed by General Rosener of the Nazi SS and which perpetrated worse atrocities that even the cruelest of the SS. The Domobranci (members of this organization) helped the Nazis against their own countrymen, torturing the Partizans who fought off Hitler. Could it be that the Slovene who supported the OSCE resolution is a Domobranec sympathiser? Genocide, human rights violations, war crimes and crimes against humanity.