For the first time since it was closed following the terrorist attacks of Sept. 11, 2001, the observation deck in the crown of New York City's famed Statue of Liberty will reopen to the public on July 4. 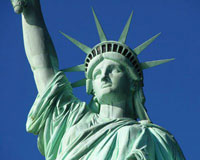 The statue itself was reopened in 2004, but visitors were only allowed into the pedestal at the base of the statue. But the pedestal is not the real draw, according to Bill Maurer of the National Parks Service, ABC News reports.

Now, thanks to the Daily News and other patriots, she is opening again. We will have, once again, a chance to get inside her head, to reaffirm the principles that have guided us, much as that statue in the harbor has helped guide us through so many turbulent times, The New York Daily News reports.

To visit the crown, you will have to make reservations through the park's ferry company, Statue Cruises, at www.statuecruises.com or by phone at 877- LADY-TIX (877-523-9849). You can reserve Crown tickets up to one year before the day of your visit.

"The Statue of Liberty is a symbol of the hope, freedom, and opportunity that America represents to the world," said Secretary of the Interior Ken Salazar. "I am delighted to announce that the public will soon be able to plan their trip to the storied crown of the Statue of Liberty once again."

Crown tickets will cost an additional $3 and will be combined with reserved ferry tickets, which are currently $12 for adults, $10 for seniors and $5 for children. Each customer can buy a maximum 4 tickets, with only one reservation allowed during any 6 month period. Children must be at least 4 feet tall, MYFOXNY.COM reports.