The chairman of the Senate Banking Committee said Monday that it is just as important to act responsibly as it is to move hastily on legislation to stabilize troubled U.S. financial markets. 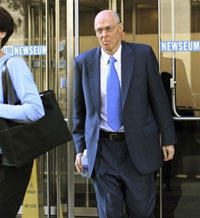 Democratic Sen. Christopher Dodd voiced confidence in Treasury Secretary Henry Paulson, saying that "we've got the right man" to deal with the problem that has roiled not only Wall Street but international markets as well.

He said Monday morning that there will be a division in Congress about how best to proceed on a $700 billion bill the Bush administration is seeking from lawmakers to buy up bad mortgage loans that have been weighing down financial companies since they became engulfed in a severe credit crisis 14 months ago.

Dodd, interviewed on CBS's "The Early Show," said many members of Congress believe a legislative relief package also should be tailored to protect taxpayers in the best way possible.

He said they should be "first in line" to get money back once conditions in the industry stabilize and recover.

"We want oversight," he said.

Dodd spoke a day after the government approved a request by investment houses Goldman Sachs and Morgan Stanley to change their status to bank holding companies.

That change will allow the two venerable institutions to set up commercial banks that will be able to take deposits, significantly bolstering the resources of both institutions. It will also grant them permanent access to emergency loans supplied by the Fed rather than the temporary loan status they have had since last March when the Fed moved to prop up investment banks following the forced sale of Bear Stearns.

Paulson and Federal Reserve Chairman Ben Bernanke kept up their outreach with Congress, holding meetings over the weekend aimed at convincing lawmakers to move quickly to approve the relief package.

Democratic Rep. Barney Frank, chairman of the House Financial Services Committee, said that Paulson "is being entirely unreasonable" to expect that Congress will pass a bill right away without examining the proposal thoroughly and adding certain provisions the Democrats want, such as limiting pay for executives of the troubled companies in need of the bailout.

"We want to limit those as a condition for giving them aid," Frank told ABC's "Good Morning America." "If Secretary Paulson would agree to that, we could move quickly."

Republican Rep. Christopher Shays, who also serves on the panel, said members "need enough time to debate this" and echoed Frank's concerns about executive pay. "We don't have these great golden parachutes and so on. In the end we're doing it for the taxpayers."

Frank said that lawmakers "are building strong oversight" into the measure, including establishing an oversight board that will report to Congress at least monthly.

"The private sector got us into this mess," Frank said, "The government has to get us out of it. We do want to do it carefully."

He also said that despite the ballooning national debt, he would not raise taxes if elected.

Congressional leaders have endorsed the main thrust of the administration plan, but also have said that it must be expanded to include help for people on Main Street as well as the big Wall Street financial firms who have lost billions of dollars through their bad investment decisions.

"We will simply not hand over a $700 billion blank check to Wall Street and hope for a better outcome," House Speaker Nancy Pelosi said Sunday in a statement. "Democrats believe a responsible solution should include independent oversight, protections for homeowners and constraints on excessive compensation."

But Pelosi, concerned about spooking markets with the possibility that the bailout package might not win approval, predicted that Congress would pass the measure this week once Democrats won the changes they are seeking.

Making the rounds of four of the five Sunday talks shows, Paulson stressed that time was critical to get the proposal passed because of the urgent need to get global credit markets functioning more normally after they essentially froze up following a number of shocks last week.

The surprise Fed announcement announcing approval of the status change for Goldman and Morgan Stanley was yet another indication of how quickly events are moving on Wall Street.

The stock of the two companies had come under pressure as investors began to worry about their future following the bankruptcy last week of investment bank Lehman Brothers and the forced sale of another investment bank, Merrill Lynch, to Bank of America.

In other action late Sunday, the administration announced that it was modifying a program announced just last Friday to try to bolster the teetering $3 trillion money-market mutual fund industry by using a $50 billion Treasury fund to provide temporary guarantees to money-market accounts.

Responding to complaints from banks that this change would put them at a competitive disadvantage for deposits, the Treasury said Sunday that the guarantees will only cover funds that were in the accounts as of last Friday. The guarantees had been put in place to stem a wave of withdrawals from mutual fund accounts that had been sparked largely by panicked institutional investors.

The banking industry had complained that the new guarantees ran the risk of sparking withdrawals by their depositors, who might decide to transfer their bank deposits to money-market mutual funds. Both accounts now have government backing and the mutual funds would not have the $100,000 limit imposed on deposit insurance for banks.

In another change that highlighted how quickly Treasury is being forced to put new programs into place, Treasury said Sunday that funds deposited in tax-exempt money-market mutual funds as of last Friday would be covered by the new guarantees. Originally, the department had said those funds would not be covered because it might jeopardize their tax-exempt status.

Paulson and Bernanke made the joint decision last week that the only way to calm turbulent markets was to deal with the root cause of all the troubles, billions of dollars of bad mortgage debt sitting on the books of major financial companies.