Barack Obama works out and spends day with family

On a day off from their contest for the U.S. presidency, Republican John McCain went to a mountaintop to sit down with renowned evangelist Billy Graham and his son, Franklin. Democrat Barack Obama went to the gym, took his daughters to play basketball and sat in the barber's chair for "a regular clipper cut." 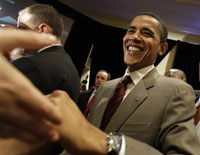 Barack Obama works out and spends day with family

Obama returns to the campaign trail Monday with an appearance in Independence, Missouri. McCain is scheduled to spend Tuesday and Wednesday in Cartegena, Colombia, before traveling Thursday to Mexico City.

McCain is working to convince skeptical conservative Republicans and evangelicals - who strongly backed President George W. Bush - that he can be counted on as a reliable shepherd of their social agenda against abortion and gay marriage. The powerful evangelical community's support will be critical if McCain is to extend his party's hold on the White House.

The Arizona senator grew up Episcopalian and attended an Episcopal high school in Alexandria, Virginia, but now attends Baptist services.

While McCain said in advance that his trip to the Graham compound - Little Piney Cove in the Blue Ridge Mountains of western North Carolina - was not political, his meeting with the the religious leaders and a photo of the session was bound to solidify his credentials with the important group of Republican voters.

"We had a very excellent conversation. I appreciated the opportunity to visit with them," McCain said after the 45-minute meeting.

McCain is acquainted with the elder Graham, who is 89 and in poor health, but it was their first time to sit down together.

Franklin Graham, who is president and chief executive of the evangelistic association his father founded in 1950, said the famed preacher "expressed gratitude for the senator's long and brave service" to the country.

The younger Graham said his father, who routinely counseled both Republican and Democratic presidents, told a story about meeting McCain's father, a Navy admiral, on a trip to Vietnam during the war when John McCain was being held prisoner in the north. He said both Billy Graham and McCain's father had prayed for the captured fighter pilot during his captivity.

Franklin Graham, who said he was impressed with McCain's "personal faith and his moral clarity on important social issues facing America today," agreed with McCain that their meeting was not political.

He said the meeting did not indicate he was endorsing anyone for president, but rather was urging "men and women of faith everywhere" to vote and be involved in the political process. "I encourage people to vote for the candidate at every level who best represents their values and convictions, and then to pray for those in authority over us as required in Scripture."

McCain said he did not know if the Grahams would vote for him. "I didn't ask for their votes," he said, calling them "great leaders."

Earlier this month, Obama met with the younger Graham as part of a session with a group of about 30 evangelical leaders in Chicago.

The Illinois senator, who was baptized as a Christian about 20 years ago, is battling Internet rumors that he is actually a Muslim, because of his name, which includes the middle name Hussein, and the Islamic heritage of his Kenyan father and grandfather.

He has also had to fight off damage done to his candidacy by Rev. Jeremiah Wright, who cursed the United States for its treatment of African Americans. The controversy over Wright's inflammatory sermons from the pulpit of the Trinity United Church of Christ on Chicago's South Side finally led Obama to denounce his former pastor and quit the church.

Obama spent his day off fitting in a 30-minute workout at a gym near his home on the city's South Side. He then got a hair cut at the Hyde Park Hair Salon, where he's been a customer for several years. Barber Ishmael Alamin, who was working at the shop, said Obama got "a regular clipper cut."

Obama returned home to pick up his daughters for a trip to the East Bank Club in Chicago's River North neighborhood to play basketball. His wife, Michelle, joined them.

"He has been a voice on the Senate Armed Services Committee, and he has traveled all over the world, but he hasn't held executive responsibility," Clark said. "That large squadron in the Navy that he commanded - that wasn't a wartime squadron."