By Anastasia Tomazhenkova: Unemployed youths will sterilize monkeys in an effort to combat aggressive primates who have been raiding farms, Indian officials decided. 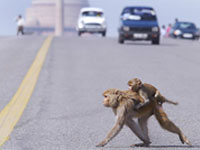 But conservationists immediately opposed that idea. They supposed the plan was unscientific and would likely exacerbate the problem of aggressive monkeys that plague many regions of India.

Indian authorities have been struggling recent years to deal with the tens of thousands of monkeys that live in and around Indian cities, many of them encouraged to frequent public places like temples and office buildings by devout Hindus who feed them, believing them to be manifestations of the god Hanuman.

In recent months, the deputy mayor of New Delhi was killed when he fell from his balcony during an attack by wild monkeys, while 25 others were wounded when a monkey went on a rampage in the city.

The mountainous state of Himachal Pradesh has a particularly bad problem, infested with rhesus macaque monkeys, who have been driven to farms and cities after losing their natural forest habitat.

The state's chief minister claimed that Himachal Pradesh would go on a "war footing" to fight the thousands of monkeys who have been turning farms into wastelands and attacking people.

"Affected districts would be identified and local youth involved in the process, who would be provided training in capturing and sterilization by the experts," the statement quoted Dhumal as saying, adding that they would use "laser sterilization."

The capacity of zoos in the area would be expanded to accommodate captured monkeys, and camps may be set up for them in order to "protect farmland from being encroached upon by them and crops damaged," the statement said.

Conservationists condemned the proposal to let untrained youths sterilize monkeys, saying it was cruel and would not solve the problem.

Sujoy Chaudhuri, an ecologist who co-authored a report by prominent primatologists and conservationists that was submitted recently to the federal and state governments, said the plan would make the monkey problem much worse.

"It is a ridiculous idea and what is worse, it will do nothing to contain the problem and probably make it worse," said Chaudhuri. "Can you imagine what having badly sterilized monkeys running around will do to the levels of aggression?" he said.