Court releases seven Muslims two days after their arrest in attacks on shops owned by Coptic Christians in a southern Egyptian town. 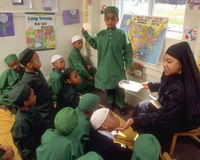 The attackers had hurled stones and set fire to several shops, smashed windows of a Coptic church and damaged two cars in the early morning hours Sunday in Isna, about 560 kilometers (350 miles) south of Cairo.

Police detained 15 people suspected of taking part in the attacks. The seven released were believed to be the main suspects, the official from the prosecutors' office said. He spoke on condition of anonymity because he was not authorized to talk to the media.

The grounds for the release of the seven, the fate of the remaining detainees or what this meant for the investigation was not immediately clear.

Sunday's rioting followed reports that two Coptic Christians pulled down the veil of a Muslim woman in a car park the previous evening. Dozens of Muslims started gathering for the protest early Sunday.

Police blocked all main streets leading into the town, but witnesses said some rioters managed to attack the shops in two of the town streets where police arrived only after several hours, they said.

Also in Isna, dozens of Muslims rioted last week following rumors of an abduction attempt and sexual assault of a teenage Muslim girl by some Coptic Christians. The rioters hurled stones and smashed windows of a pharmacy were they suspected the Copts forced the girl to have sex with them.

Police later arrested two Coptic Christians suspected of taking part in the girl's abduction. They were ordered detained for 15 days on charges related to sectarian tensions.

Muslim-Coptic tensions have increased in southern Egypt, a traditional stronghold of the Copts, amid growing religious conservatism in a society dominated by Sunni Muslims.

On New Year's Day 2000, a dispute between the Muslims and Copts in the mixed southern village of Kosheh escalated into a clash with groups of armed villagers shooting at each other, leaving 21 Christians and one Muslim dead.