Birdwatcher accused of killing cat leaves Texas as someone threatens him

A prominent birdwatcher Jim Stevenson charged with shooting a cat claimed that he left Texas after receiving death threats. 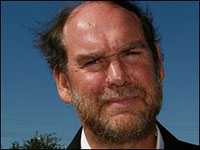 Birdwatcher accused of killing cat leaves Texas as someone threatens him

The founder of the Galveston Ornithological Society said he has received death threats since his trial on animal cruelty charges. A judge declared a mistrial in the case earlier this month when the jury failed to reach a verdict.

Stevenson told police that he was standing on his porch Wednesday when someone shot at his head. He said he fell back but was not injured.

The Galveston Police Department has dropped its investigation into the matter, saying Stevenson would not cooperate. There were inconsistencies in Stevenson's account, said Lt. Jorge Trevino, and Stevenson refused to have his hands tested for gunpowder so it could be determined if he fired the weapon.

Stevenson said he would rather have the FBI handle the case.

"I've been through a lot with the Galveston Police Department," he said.

In his trial, Stevenson admitted shooting the cat but defended the action because he believed the cat was threatening endangered birds and had no owner. Prosecutors said the cat was the pet of toll-bridge worker, who fed and cared for several strays.