New York police charged a self-styled rabbi with sexually abusing children, but only Israeli police arrested him on Friday. 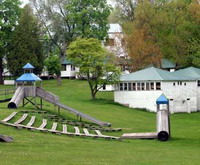 It was not immediately clear if the ultra-Orthodox Israeli-born Abraham Mondrowitz would be extradited to the United States. The spokesman for the Justice Ministry, Moshe Cohen, said the suspect would be remanded on Sunday.

Mondrowitz, 60, is wanted in New York for molesting hundreds of children under the guise of a rabbi and psychologist who became highly revered among the Gur Hasidic sect in Brooklyn for his expertise with minors, the Haaretz newspaper reported Friday.

The U.S. Justice Department had two months ago resubmitted a 22-year-old request to Israel to extradite the suspect, Haaretz said.

The father of seven fled the United States for Israel in 1985, soon after New York police charged him with sexually abusing a 10-year-old boy in two instances. The United States requested Mondrowitz's extradition in 1985. Israel ordered his expulsion in 1987.

When the United States requested Mondrowitz's extradition, sodomy - one of the charges against Mondrowitz - was not recognized in Israel as full-fledged rape and thus was not included in the extradition treaty between the countries, Haaretz reported. Although Israel was willing to change the treaty to include sodomy, the United States was not at the time, Irit Kahan, who headed the Justice Ministry's international department at the time, told Haaretz.

Only recently the treaty was changed to include all offenses for which the punishment is more than one year in prison, Kahan said.

Mondrowitz grew up in Tel Aviv and in Chicago after his family moved to the United States in the 1950s, Haaretz said. In 1979 he moved to Brooklyn, where he impressed the Orthodox Jewish community when he told them he had degrees in clinical psychology and educational administration, and was an ordained rabbi, the daily said. He counseled children at a clinic at his home.

In December 1984, New York City police charged that on two occasions in June of that year, Mondrowitz abused a 10-year-old boy at his home.

U.S. officials had requested Mondrowitz's extradition in 1985 soon after he arrived in Israel, but the Interior Minister at the time, Yitzhak Peretz of the ultra- Orthodox Shas Party, did not act on the request.

The Israeli response to the U.S. extradition request was "lukewarm to negative," according to one American official who spoke on condition of anonymity two years after the request.

"This is one of the worst cases I could ever imagine," Milo said on Israel Radio in 1987. "After checking the details I decided this man should be sent to the United States and be punished for the terrible things he did to children."

Peretz told Israeli television he refused to extradite Mondrowitz because he had no conclusive proof that the charges against him were true.

Haaretz said that Mondrowitz was a highly influential figure in the Gur community of Brooklyn in the early 1980s. New York police suspect Mondrowitz sexually abused children brought to him as patients, including with acts of sodomy, Haaretz said.

In many cases, the parents were waiting in the next room for the treatment to end, so they could take the children home, the newspaper reported.