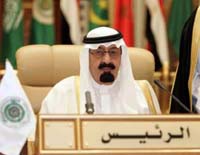 The king met Thursday with German Foreign Minister Frank-Walter Steinmeier, who recently returned from a trip to the Middle East. Steinmeier later signed a tax agreement with his Saudi counterpart, Prince Saud al Faisal, as well as a declaration of intent to hold regular foreign policy consultations.

Later in the day, Abdullah toured downtown Berlin, including the Brandenburg Gate, which stood for decades on the eastern side of the Wall that divided the city.

The king's visit is part of a European tour that already has taken him to Britain, where he discussed terrorism and the Middle East peace process with Prime Minister Gordon Brown, and the Vatican where he met with Pope Benedict XVI.