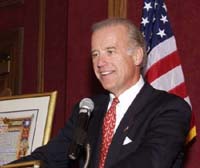 Biden, who chairs the U.S. Senate's foreign relations committee and is knowledgeable on international relations, says what is happening in Pakistan is linked to broader U.S. foreign policy goals. He says U.S. policy should be shifted from one focused solely on President Pervez Musharraf to one based on Pakistan as a whole.

"Pakistan has strong democratic traditions and a large, moderate majority. But that moderate majority must have a voice in the system and an outlet with elections," Biden was to say Thursday during a speech at Saint Anselm College. "If not, moderates may find that they have no choice but to make common cause with extremists, just as the Shah's opponents did in Iran three decades ago."

"But unlike Iran, Pakistan already has nuclear weapons," Biden says in prepared remarks, which his campaign provided to The Associated Press.

Musharraf been promising to restore democracy since he seized power in 1999 during a bloodless coup. His actions since assuming emergency powers Saturday have included ousting independent-minded judges, clamping down on the media and putting thousands of Pakistanis in jail or under house arrest.

Musharraf said his decision to suspend the constitution and oust the country's top judge were necessary to prevent a takeover by Islamic extremists. Biden disagreed, saying in the speech that such moves will only invite extremists, similar to those in Iran nearly three decades ago.

In 1979, hundreds of militant Iranian university students seized the U.S. Embassy in Tehran because they objected to U.S. support for their leader, Mohammed Reza Pahlavi, who was viewed by many Iranians as a U.S. lackey and came to power after a CIA-backed coup that toppled Iran's democratically elected prime minister in 1953.

About 70 Americans were held hostage for 444 days. They were released in January 1981 when Ronald Reagan was sworn in as president.

Biden said this scenario could be repeated, only this time with nuclear implications.

"It is hard to imagine a greater nightmare for America than the world's second-largest Muslim nation becoming a failed state in fundamentalist hands, with an arsenal of nuclear weapons and a population larger than those of Iran, Iraq, Afghanistan and North Korea combined," said Biden, who trails in the race for the Democratic presidential nomination.

New Mexico Gov. Bill Richardson, another Democratic candidate in next year's presidential election, also was scheduled to address the same forum on Thursday.