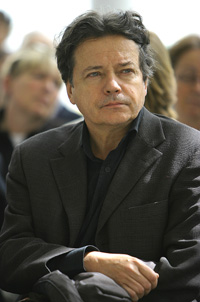 The Academy of Motion Picture Arts and Sciences decided that only honoring the movie business with Oscars was not enough and is planning to celebrate cinema in still another way - on about eight acres (3.24 hectares) in the heart of Hollywood.

The academy has commissioned an architect to design what is probably the world's first museum dedicated to capturing the full scope of filmmaking.

The Academy Museum of Motion Pictures will occupy two city blocks not far from the Kodak Theatre, where the Academy Awards are held. The moviemaking crafts represented will correspond with the academy's 15 branches, including actors, producers, directors and screenwriters.

No word yet if a picket sign from the Writers Guild of America strike of 2007, which began Monday, will have a place in the new museum.

But one thing is certain. "It's going to be what it should be: a monument to the art of film," academy president Sid Ganis told The Associated Press.

"It's going to be immersive and ... it will express what film has been about and how film has shaped world culture...

"I want people to understand how film relates to the world around us, how storytelling in the film sense is accomplished and how, through film, we move ahead in our lives to some degree," Ganis explained. "I hope that's not too highfalutin', but that's what I'm hoping for."

The academy has long wanted to establish a comprehensive film museum, "but not with the gusto, the energy and the commitment we've had over the last few years," he said.

That fervor was reflected Thursday with the announcement of an architect for the museum complex: French firm Atelier Christian de Portzamparc.

"I have a true passion for cinema and often link this art to architecture: the art of motion, art of light, editing, sequencing of the time and the life, celebration of the living," de Portzamparc said in a statement.

"We're excited," he said. "This is a giant leap toward getting it done."

Academy members are working with consultants to conceptualize the museum's contents and design. Fundraising, to the tune of $400 million (EUR271.7 million), is expected to begin next year.

If all goes as planned, Ganis said, museum construction will begin in 2009 and the facility will open in 2012.