WNBA player Deanna Jackson has been arrested in Israel for assaulting an opponent in the car park following the national league title match. 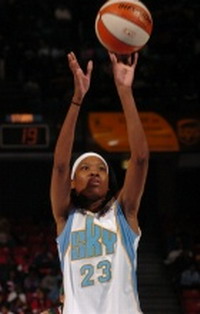 Jackson, who plays for the WNBA's Chicago Sky, was turning out for Anda Ramat Hasharon when she was arrested Wednesday night for attacking Elitzur Ramle guard Ina Gourevitch after the 81-68 defeat.

The two players had got into a skirmish and hurled insults at each other toward the end of the game.

Jackson sought out Gourevitch in the parking lot afterward and allegedly punched her in the nose in front of dozens of police officers. Gourevitch was taken to a hospital and diagnosed with a broken nose.

The 27-year-old Jackson was arrested on the spot and had her passport confiscated, police spokesman Micky Rosenfeld said.

"After the game was over, she (Jackson) attacked one of the players on the other team and punched her in the face," Rosenfeld said. "She was arrested and questioned, and is awaiting charges and trial."

Jackson was originally scheduled to leave Israel on Thursday with the WNBA preseason beginning next week. But she will now remain in Israel at least until May 3, when she will next appear in court.

In a statement released to the media by her Israeli team, Jackson was contrite.

"I did not mean to harm Ina Gourevitch and I apologize to her," she said. "I've never acted this way - it's uncharacteristic of me and I hope that it is now behind me."