Michael Essien scored in injury time and gave Chelsea a 2-1 win over Valencia and a spot in the Champions League semifinals. 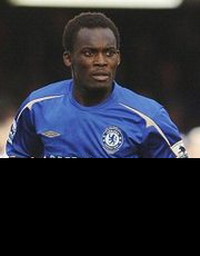 Essien scored with a hard shot to the near post to send Chelsea into the semifinals for the third time in the last four years with a 3-2 aggregate win.

Andriy Shevchenko also scored for Chelsea, knocking in a shot from close range in the 52nd minute. Fernando Morientes had given Valencia the lead in the 32nd.

"A late goal hurts because it leaves you with no time to keep your chances alive. It's one of the worst fates a team can suffer," Valencia coach Quique Sanchez Flores said.

Chelsea, the first English team to win at the Mestalla stadium in 40 years, will face either Liverpool or PSV Eindhoven in the semifinals.

The two-time defending Premier League champions, who have already won the League Cup, are trying to win four major trophies this year. The team trails Manchester United by three points in the Premier League and also has reached the semifinals of the FA Cup.

Essien started in the midfield for Chelsea after having been sidelined since March 11 with a knee injury. But the Ghana defender won't play in the first leg of the semifinals in two weeks because of a suspension from too many yellow cards.

Valencia started well, with Morientes partially deflecting David Silva's cross with his leg in the 10th. The shot went straight into the arms of Chelsea goalkeeper Petr Cech.

The former Real Madrid and Liverpool striker then hit the post in the 31st but couldn't handle the rebound. A minute later, Morientes scored to make it 1-0. David Villa then sent a shot over the crossbar only a minute after the goal.

Didier Drogba nearly scored his 31st goal of the season in the 40th as Chelsea pushed forward, but Valencia goalkeeper Santiago Canizares made a diving save.

Chelsea manager Jose Mourinho brought on Joe Cole for Lassana Diarra at halftime, and the move seemed to work as the Blues equalized seven minutes later when Shevchenko scored.

With Chelsea controlling the game, Drogba pounced on an error in the Valencia defense in the 67th but his low roller was easily saved by Canizares. A minute later, Cole managed to get to the top of the area and send off a shot, but it went wide.

It took until the 79th for Valencia to create a second-half chance as substitute Miguel Angel Angulo dribbled past defender Ricardo Carvalho just inside the Chelsea area before firing an angled shot just over the bar.

Canizares then denied Michael Ballack in the 85th. The Valencia goalkeeper dived to his left to deflect the German's header over the bar.