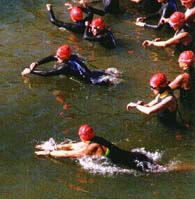 Maurer swam through the Bay of Naples in 6 hours, 22 minutes, 46.9 seconds, beating Russia's Natalia Pankina by just under a second. Another Russian, Ksenia Popova, was third.