Russia launches its own Paralympic Games 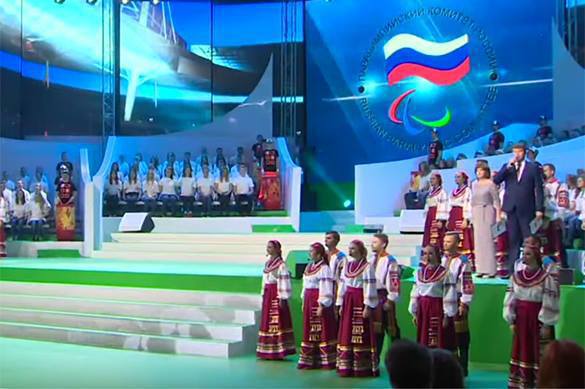 "Today's gala event is a tribute to our Paralympians, whose hard work and courage, belief in themselves and their capabilities serve as an inspiring example to all," Vitaly Mutko said, reading Vladimir Putin's address to the Paralympic athletes.

"The Russian team is one of the strongest teams in the world, and I am confident that you will demonstrate your skills, persistence, dedication and determination to victory," the president's address to the Russian athletes said.

Sports Minister Vitaly Mutko expressed his regret about the fact that the Russian Paralympic athletes were suspended from the Paralympic Games in Rio de Janeiro. "I am sure that these are temporary difficulties, and Russia will soon return to the great Paralympic family - the work on that will be done quickly. The winners will receive the same prizes and awards that they would receive in Rio. We will do our best to develop our Paralympic movement," said Vitaly Mutko.

The head of the Russian Paralympic Committee Vladimir Lukin, said: "It is a pity our athletes are not together with their brothers in spirit. Sport unites athletes from all countries, irrespective of political games and solutions," the official said.

Later, Sport Minister Vitaly Mutko told reporters that he was feeling guilty for the fact that the Russian athletes were excluded from the Paralympic Games in Rio. "We feel guilty and responsible, - said Mutko. - In this situation it is very difficult to say something, because it was all very strange. The court's decision did not have any grounds."

President Putin initiated the organization of the competitions for Russian Paralympic athletes after they were barred from participating in the Paralympic Games 2016 in Rio de Janeiro. The All-Russian Paralympic Sports Competitions will take place on September 8-9 on major sports venues in the Moscow region. As many as 263 athletes will perform in 18 disciplines.