Dmitry Tarasov, a player of Moscow's Lokomotiv football club, was fired by the club administration for demonstrating a vest with Vladimir Putin after 1/16 finals of the Europa League with the Turkey's Fenerbahce. 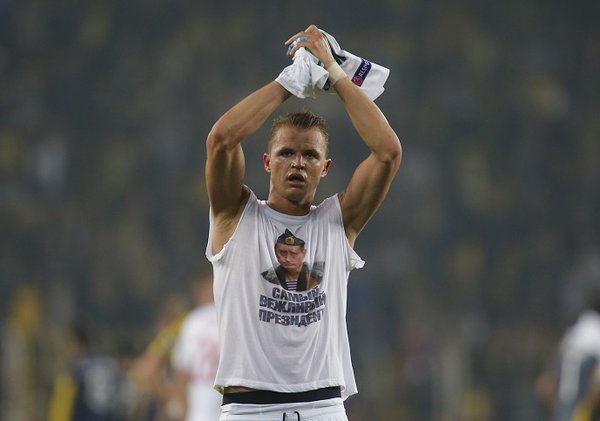 According to R-Sport, Tarasov will have to pay the fine of 300,000 euros (25 million rubles) for wearing the sleeveless shirt with an image of Vladimir Putin that said "Most polite president."

Dmitry Tarasov himself said that he did not consider his act a provocation. "It was my idea, I didn't want any provocations. I'm just a patriot of my country, and Vladimir Putin is our president. The shirt said that we have a great president. There is nothing wrong about it. I did it after the match, when went to thank my fans. It is not the first time when I put on this vest - nobody has paid attention to this before. Most likely, the controversy sparked because the game was held in Istanbul," Lokomotiv midfielder told LifeNews.

Noteworthy, UEFA intends to punish Tarasov as well. The organization may disqualify the player for up to ten matches.

Fenerbahce won the game in Turkey with 2:0. The return match will take place in Moscow on February 25.