Four women athletes could be men

Another scandal is brewing in the world of athletics. Four female athletes, whose names were not exposed to the general public, are genetically closer to males, British news agencies said, the Sovetsky Sport report. 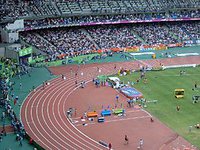 The XY chromosome that determines the male sex (unlike female the XX) was found with the athletes. In addition, medical specialists found internal male sex glands with them.

It is assumed that it goes about a genetic disease that makes women more muscular and aggressive.

In the future, such athletes will be excluded from sports competitions, and the International Association of Athletics Federations will change the rules of gender testing.

Previously, similar suspicions appeared regards to South African runner Caster Semenya. It is quite possible that she appears as one of the four athletes in the current scandal.