Venus Williams Moves on at US Open

Venus Williams enjoyed a "New York Moment" at the U.S. Open. She probably never guessed she'd need one to pull her through the first round. 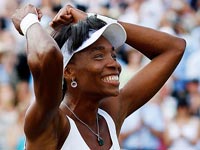 Venus Williams Moves on at US Open

Dealing with a balky left knee and an opponent who didn't buy into the usual opening-night script, Williams needed 2 hours, 43 minutes to defeat Vera Dushevina of Russia.

The third-seeded Williams, who has never been ousted from the Open before the fourth round, trailed by a set and a break in the second before rallying for a 6-7 (5), 7-5, 6-3 victory Monday.

She didn't want to talk much about the knee, which brought on a 9-minute injury timeout during the first set, but instead preferred to talk about the crowd — especially the reaction when she was down 5-4 in the second, serving to stay in the match.

"One of those great New York moments," she called it, The Associated Press reports.

While Venus struggled, her sister Serena cruised. After a shaky first set, second-seeded Serena opened her defense of the U.S. Open title with a 6-4, 6-1 victory over 19-year-old American wild-card Alexa Glatch. Serena improved to 40-0 lifetime in the first round at Grand Slam events.

"I was a little nervous today because I have that first-round thing going," Serena said after needing an hour and two minutes to win, informs New York Daily News.

Estonia's Kaia Kanepi was the first seed in the women's draw to be knocked out - with the 25th-ranked Estonian going down 6-0 2-6 6-2 to qualifier Kai-Chen Chang.

However, seventh seed Vera Zvonareva and Agnieszka Radwanska, the No.12 seed, came through their opening rounds unscathed.