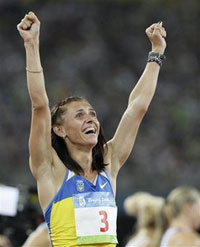 The International Olympic Committee temporarily suspended the Ukrainian athlete from the Beijing Games pending a final ruling Friday, the same day as the medal round of the long jump.

"According to the decision of the IOC, Lyudmila Blonska has been removed from the start list for the women's long jump final," the International Association of Athletics Federation said in a statement.

The IOC's disciplinary commission met to hear Blonska's case Thursday and decided to provisionally suspend her from all competition and cancel her accreditation. The IOC's ruling executive board will issue its final ruling Friday.

The IOC said Blonska's "A" and "B" samples both were positive for the steroid methyltestosterone.

The 30-year-old Blonska tested positive after finishing second in the heptathlon medal round last Saturday. If found guilty of doping, she will be stripped of the medal and expelled from the games.

Blonska also faces a lifetime ban from the IAAF for a second doping violation. She served a doping suspension for the steroid stanozolol between 2003-05.

The third-place finisher in the heptathlon was American Hyleas Fountain, who would be bumped up to the silver if Blonska is disqualified. Russia's Tatiana Chernova would move up from fourth to the bronze.

Blonska is the highest profile athlete, and first in track and field, among the five who have tested positive so far at the games.