Russian sumo wrestler banned for life because of one marijuana cigarette

Russian wrestler Wakanoho was banned for life by the Japan Sumo Association on Thursday after being arrested earlier this week on suspicion of possessing marijuana. 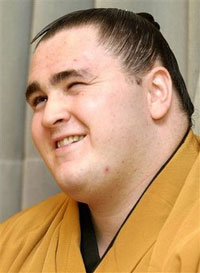 Russian sumo wrestler banned for life because of one marijuana cigarette

Wakanoho, whose real name is Soslan Aleksandrovich Gagloev, was taken into custody on Monday after police officers found a marijuana cigarette in a wallet he lost in Tokyo in June.

Someone found the wallet and handed it to police, who traced it to the 357-pound (162-kilogram) wrestler because of an identification card inside.

"Based on the fact he was taken into custody on Aug. 18th on suspicion of possessing marijuana, it was decided today that Wakanoho would be dismissed," JSA chairman Kitanoumi said at a press conference.

Wakanoho told police he had received the marijuana from a foreigner in Roppongi - a Tokyo district famous for its bars, clubs and raucous nightlife.

Wakanoho's ban - the first handed to an active wrestler in sumo's long history - was announced after an emergency meeting of the JSA executive board.

Under Japan's Cannabis Control Law, possession of marijuana is punishable by up to five years in prison with forced labor. Foreigners convicted of drugs crimes can also be deported from Japan and slapped with a lifetime re-entry ban.

It was unclear how prosecutors planned to proceed with the case. Wakanoho turned 20 on July 8 and was legally a minor at the time of the alleged violation

After his professional debut in March 2005, Wakanoho powered his way up the ranks, reaching the top sumo division in a little over two and a half years. He was one of 15 foreign wrestlers in the highest "makuuchi" level, along with Mongolian grand champions Asashoryu and Hakuho.

His fiery temper has often overshadowed his talent. In May, the JSA reprimanded the Russian for smashing a shelf in the wrestlers' communal bathroom following a defeat.

He is not the first foreign wrestler to get into trouble in Japan's ancient sport.

In December of 2000, maegashira Toki, who is Japanese, hit and killed a pedestrian while driving in Osaka. He was suspended for only one tournament.

Last year, grand champion Asashoryu was given a two-tournament suspension after claiming an injury and skipping out on summer tour events, only to be shown later on television playing football in his native Mongolia.