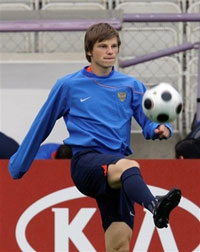 "We are interested in Arshavin," Barcelona newspaper Mundo Deportivo quoted Soriano as saying on Thursday. "But our interest isn't sudden since we have been following him with discretion for a few months now."

Soriano said Barcelona first noticed the 27-year-old Zenit St. Petersburg player back in April when he played against German side Bayer Leverkusen in the UEFA Cup, a competition the Russian club eventually won.

"We were under the impression that he played in midfield. But now we have seen that in big games, with his national team at the Euro, that he plays on the flank," Soriano said. "That's dispelled any doubt and this is the profile of a player we would like.

"But it won't be easy to sign him because all teams want him now."

Arshavin has been one of the stars of the European Championship despite only playing two games because of suspension. His dribbling and passing skills, plus two goals in as many matches, have fueled speculation he will play in one of Europe's biggest leagues next season.

"I have supported Barcelona all my life. Barcelona are my dream," Arshavin said Wednesday. "I never thought I would have a genuine chance to play for the club. Let's see how the situation unfolds."

Arshavin would fit into Barcelona's plans since Soriano said the Spanish club was planning to make three or four more signings this summer. It has already made four defensive signings since a third-place finish - its worst for five years.

Arshavin and Russia face Spain Thursday for a chance to meet Germany in the Euro 2008 final on Sunday.